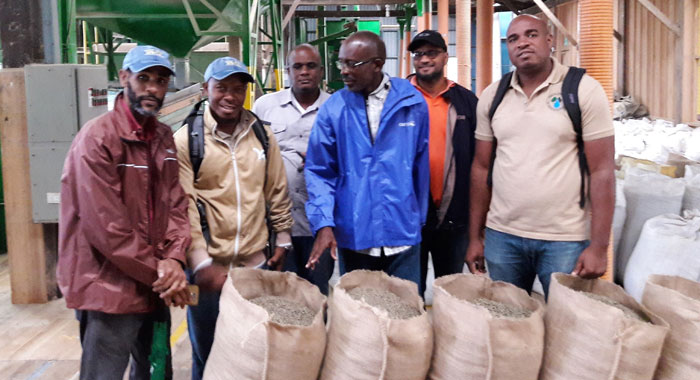 Technicians from Dominica and St. Vincent and the Grenadines during a visit to Finca Arias in Costa Rica.

SAN JOSE, Costa Rica — The Inter-American Institute for Cooperation on Agriculture (IICA) recently completed the second phase of a project that provided technical support to the ministries of Agriculture in Dominica and St. Vincent and the Grenadines, as reported by the specialised agency of the Inter-American System for rural development.

The Institute assisted in developing the commercial and production capabilities of technical specialists and producers of the coffee sector in the two countries.

IICA launched the project in 2016 in response to the countries’ request for advice regarding the feasibility of coffee production in each country.

The technical advisory reports provided the countries with recommendations on the development of coffee as a commercial product, based on the understanding that this would involve long-term investment in matters related to production and knowledge building among interested groups in all areas of the production process.

During the second phase of the project, delegations from the ministries of Agriculture, accompanied by IICA personnel, carried out visits to Jamaica and Costa Rica in order to study the operation and several components of the value chain.

Additionally, six technical specialists from both countries visited Costa Rica to study the operation of the coffee industry. They toured coffee propagation nurseries, coffee research facilities, coffee farms of varying sizes and with different farming system approaches, and plants where coffee berries are processed for domestic and external markets.

The final activity of the second phase of the project involved the delivery of two commercial coffee varieties to the ministries of Agriculture in both countries, in order to conduct research under local climatic conditions.

Dominica and SVG have highlighted IICA’s efforts to support the coffee sector and have expressed interest in receiving further support.

IICA is the specialised agency for agriculture in the Inter-American system, with a mission to encourage, promote and support its 34 member states in their efforts to achieve agricultural development and rural well-being through international technical cooperation of excellence.