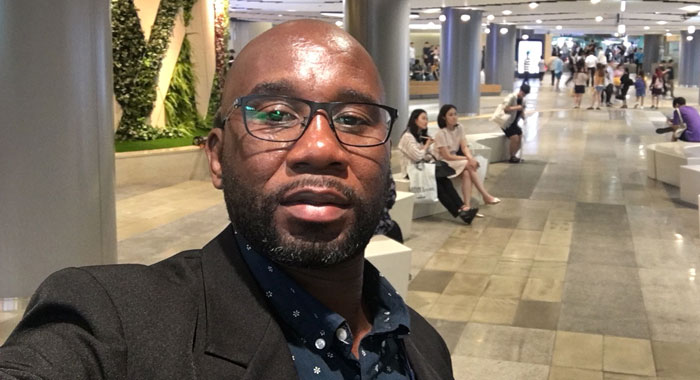 Journalist Kenton X. Chance in a selfie taken in South Korea during his visit last week.

I, Kenton X. Chance, journalist and executive editor of iWitness News, would like to categorically deny reports repeatedly broadcast on WE FM last week, that I journeyed to the People’s Republic of China, as a public relations and translation attaché for a St. Vincent and the Grenadines politician.

The facts are as follows:

I accepted an invitation from the Universal Peace Federation (UPF) to attend their “International Leadership Conference” in Seoul, South Korea from 27-29 August 2018.

In order to reach my destination, I travelled to Barbados, New York, and Guangzhou (in southern China). The organisers met the full cost of air travel, ground transportation in South Korea, hotel accommodation and food during the conference. I personally funded, from my own resources, all additional costs, including meals during layovers. I received no payment or reward for attending the conference and I was not asked or otherwise encouraged, before, during, or after the conference, to write or otherwise publish anything about the event.

At no point during my trip did I have cause to speak Mandarin Chinese — a language in which I happen to be fluent — except to purchase food and ask about the locations of stores in the airport terminal during my layovers in China.

I attended no meetings except for the sessions that were part of the conference in South Korea. I made absolutely no interventions during the conference. At the end of the conference, I interviewed two persons, a Christian cleric from Barbados, and a Senator from Haiti, and used the material to produce an article, “When a controversial group pursues a noble ideal”, published on the iWitness News website on 5 September 2018. This article was not vetted by anyone before publication.

Politicians, clergy from various religions (Christianity, Hinduism, Islam, Buddhism), social actors, and media from around the world attended the conference.

The conference was also attended by Roland “Patel” Matthews, the Member of Parliament for North Leeward in St. Vincent and the Grenadines.

He was among delegates that travelled on the same flights as I did and, at in the airport terminal in China I offered to use Mandarin Chinese to help him to order food, a common courtesy that I would have attended to anyone else, and especially to a fellow Vincentian.

This was the second such conference by the UPF that I have attended, the first being in 2009 in Taiwan, when I was a student there. Several other students from my university (most of whom were not journalism of communications students) also attended that conference.

I consider the claim that I had travelled to China as an attaché to a politician to be malicious and intended solely to try to discredit me as an independent-minded journalist.

As a journalist, my profession has taken me to conferences across the world, many of which were attended by government ministers from St. Vincent and the Grenadines. I do not recall any claims being made in the past that I had travelled as a press attaché to any of these government ministers, many of whom I have interviewed and written about during those conferences.

I trust that those who have been providing misinformation to the public will proceed to make the necessary corrections now that they are in possession of the facts. This statement is also intended to inform other media outlets and professionals of the facts.