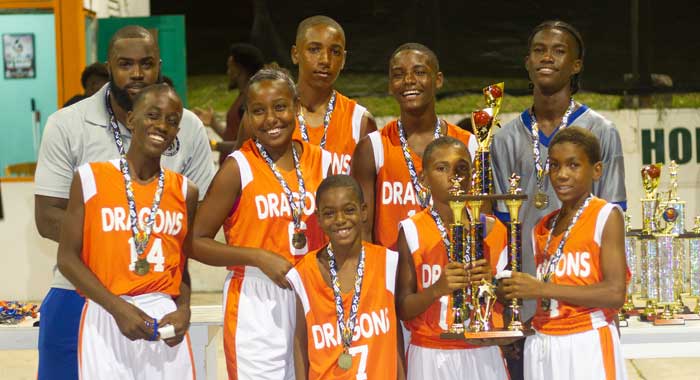 The annual summer tournament has become an integral part of Bequia’s entertainment while school is out of session.

In doing do, it has achieved one of its goals of keeping the youth positively occupied during the school hiatus.

Defending champions Raptors dominated East Blazers for the second year running to capture the 2018 Championship in the First Division.

Young Duke come out on top for 2018, defeating Blazin Heat also in two games for the Second Division title, and Dragons emerged victorious, convincingly defeating the new U16 team Golden Knights in two games of final best of three series.

Vice President of the SVGBF, Karel Bramble attended the ceremony and congratulated the winning teams and to the association for successfully completing another tournament.

President of the Basketball Association, Sabrina Mitchell expressed gratitude to Vita Malt and the St. Vincent Brewery for their continued support every year, and thanked the other sponsor partners who gave small, but essential support.

In her closing address she said a simple thanks to the numerous table officials, referees, executive members who volunteered their time during the seven-week event and whose commitment make for a smooth running competition.

She mentioned the young referees in training, Jermaine John, Tamara Woodley, and Kirsta Bailey who she stated are doing an excellent job.

Mitchell pledged that the Bequia Association will support them in the process, if they aspire to become FIBA qualified.

She also thanked the U16 coaches for their dedication working with the young kids to ensure that this important feeder system continues to thrive and thereby introducing new players to the game every year.

More than 60 quality trophies, plaques and gold and silver medals were presented to the event winners, for both team and outstanding individual efforts.

Most Valuable Raptors’ Player, also a member of the SVG Men’s National team, Kirstin Lampkin and teammate, the talented Cody Compton, easily led Raptors to victory in two games of the Best of Three Final series vs. veteran team East Blazers, who continue to make it to the final round, but cannot secure the championship. Raptors defeated East Blazers 66 to 57 in game 2, led by Cody Compton, who scored 27 points in the final game and was adjudged the MVP for the Best of 3 final series. Compton is also a member of the SVG National Team who travelled to St. Lucia for the 2018 Windward Islands Championship.

Nicholas Lewis, also a SVG National team player, and MVP of the Windward’s tournament and the 2017 Second Division overall MVP, was adjudged the overall MVP of the tournament. This year marks 17-year-old Lewis’ rookie appearance in the top division.

Although his team, Rising Stars, were knocked out in the semi-final round, he continues to net impressive all round statistics: 180 points, 67 rebounds, 32 assists, 38 steals and 7 blocks in seven games of the first round of competition.

Kings made a good effort in the semi final round, but despite that team most valuable player Darreo Glasgow’s efforts, they were knocked put in the semi final round. Glasgow is also a member of the SVG National Men’s team and the National 3×3 team. The Police United team finished in the basement position of this division, placing 5th, but Nimroy LaBorde still grabbed a single award for his team, being recognised as the Police United MVP.

Donjay Peniston was also awarded the most assists in the second division with 18 in 6 games. Despite the dominant rebounding and shot blocking abilities of Michael

Peniston, with 68 and 25 respectively, Blazin Heat fell short of victory. The third place team Rising Stars faired well in the completion, received a lot of trophies, despite being knocked out in the semi final round. Small forward Dario Barber was adjudged the Division’s Most Valuable player overall with 105 points, 56 rebounds, 30 steals, 6 assists and 9 blocks in 6 games, and also received the most points recognition, and his own team’s most valuable player. Teammate Rodine Hazell had the most steals with 46 in 6 games. Rising Stars young star centre 17-year-old Augustin

Pollard was recognised as the most improved player for 2018.

Bequia’s Under 16 Division continues to give value to the development of the young athletes of SVG, with 2018 being no exception, generating most of the leading young basketball players in our country. New team Golden Knights joined the well-established 6 teams in the youth division, and made it to the finals, before being swept by 2017 runners up Dragons, who are coached by Kirsta Bailey, who has given a new focus to these young and talented players.

Dragons’ young star, 14-year-old Giovanni Miller cleaned up the trophies and was adjudged the 2018 Overall MVP, with 83 points, 100 rebounds, 5 assists, 28 steals, and 8 blocks in six games. Additionally, Miller received his team’s MVP once again this year, the final series MVP, as well as the most rebounds with 100 in 6 games! His team mate McCoy

Hazell received recognition for the most assists with 14 in 6 games. Golden Knights star Corsini Pollard was awarded his team’s MVP as well as the most points with 103 in 6 games.

Anthony Charles of the 4th place Hornets had the most steals with 46 in 6 games and teammate Jerez Joseph, was awarded the Hornets MVP. Kody Williams of 3rd place Titans was awarded the totals MVP. The 5th, 6th and 7th place teams Young Wizards, Hawks and Rockets got trophies for their most valuable players:

Erianna Osborne, with trophies donated and presented by Alston aka the candy man.

The 21st Annual Tournament is scheduled to open July 2019.