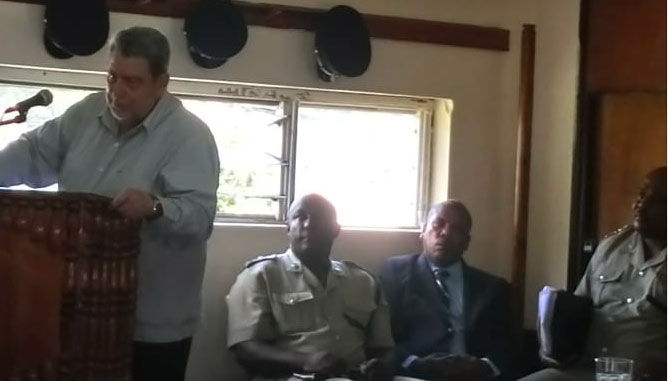 Prime Minister Ralph Gonsalves speaking at the meeting on Monday.

Persons who join the Royal St. Vincent and the Grenadines Police Force would no longer take the oath and become a police officer without undergoing training.

Prime Minister Ralph Gonsalves told a meeting of some 280 police officers at the Old Montrose Police Station on Monday that his government is revising the recruiting protocols.

Under the existing policy, once recruits enlist in the Royal St. Vincent and the Grenadines Police Force, they immediately take the oath of office and become police officers before commencing the initial training at the Police Training School.

This, however, has posed some problems to the leadership of the Police Force because some persons, after they enlist, do not display the attitude that is required of a police officer, Gonsalves said.

The prime minister said the policy will be changed, in keeping with the recommendation of the commissioner of police and the high command.

Under the new policy, recruits will take the oath of office only after they have successfully completed training at the Police Training School and exude the required attitude and aptitude to hold the office of a police officer.

The prime minister also announced that in the new policy, the probationary period for a recruit will increase from 18 months to two years.

He said a recruit might have most of the qualities sought after by the police, but lack the mental discipline that drives a police officer.

This draft policy, Gonsalves said, has been taken to Parliament already for debate.

Monday’s meeting was also attended by