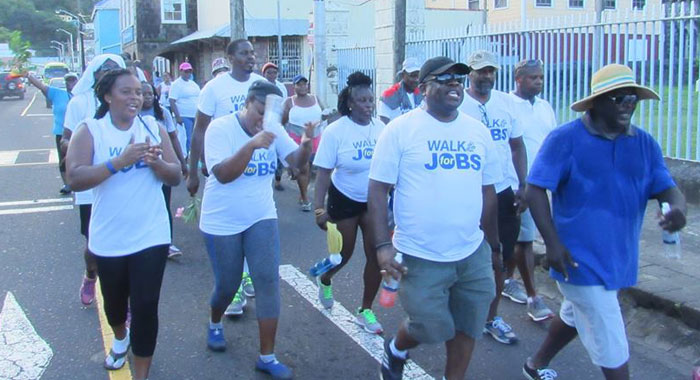 Member of Parliament for North Leeward, Roland “Patel” Matthews, second right, and other persons during the walk last Saturday.

The agriculture sector can be used to create jobs in St. Vincent and the Grenadines, says opposition spokesperson on the sector, Roland “Patel” Matthews.

“We, in this country, need to be doing stuff, to be expanding our economy so much so that our young people can find jobs,” Matthews, who is Member of Parliament for North Leeward, told iWitness News.

He was speaking during an interview in Pembroke on Saturday, when members of his New Democratic Party, led by party president and Opposition Leader Godwin Friday, walked from Fitz Hughes to Kingstown to highlight high unemployment and crime.

Matthews said agriculture is a sector in which the country has lost a lot of money, adding that the agricultural produce import bill is very high.

“Things that we can produce in St. Vincent and thereby create employment, we are importing them instead.”

Among these, he mentioned carrots, some root crops, vegetables, poultry products and pork.

“And, at the same time, it is interesting to hear the Minister of Agriculture [Saboto Caesar] say that we are gonna export more to Grenada, in terms of beef and in terms of pork, but yet in St. Vincent and Grenadines, we continue to import more.”

The MP said SVG is a small country that has vast human and land resources.

“And we are not putting it to the test. Because I am confident that if the government does its homework and put in place the necessary things that will create employment, it will happen.”

He said an agricultural census has not been done since 2001.

“We need to do much better than we are doing now and because we are not doing things the way we are supposed to , it is, therefore, creating this problem of unemployment, joblessness in the country and, in fact, we can claim that this is contributing significantly to the crime situation because a lot of the crimes that are committed are done by young people and when you check some of their backgrounds, they are unemployed.

“So there must be some link there and we need to stop that in its track and that is the reason why we are here today marching.”

Matthews noted that agriculture and fisheries are often twinned.

“Throughout the region, a number of countries have stepped up in terms of their agriculture and fisheries and they are doing tremendous. We have been making the call time and time in the Parliament, telling the government that the way to go is agriculture and fishing because we know for a fact that fishing is an industry that is making a lot of money and we are in a good position to make a lot of money.”

Matthews noted that the government had leased out most of the fisheries complexes to private entities.

“And I hope that this gives a boost to the industry. We have an international airport but we are not capitalising on it, because agriculture produce could reach very far places, but we have to do what is necessary to get our products out there in the market so that we can get good monies for our products and services and St. Vincent, as I said, we are in an ideal position but we are not capitalising on it. We need to do that.”

He said that in addition to the 46 per cent of the nation’s youth who are unemployed, there is an additional 20 per cent of the total population, much higher than the rate when the Unity Labour Party came to office in March 2001.

“And I wonder what is their answer to that. While we acknowledge the fact that we are doing good educationally, at the same time, a person who is educated and not working is still unemployed and that is the problem that we are talking about,” Matthew told iWitness News.

He said the responses along the route of the walk were positive.

“… people came out and greeted us,” he said, adding that people inquired about the purpose of the walk.

The NDP will, this week, walk from Georgetown to Kingstown to highlight the same issues of unemployment and crime.