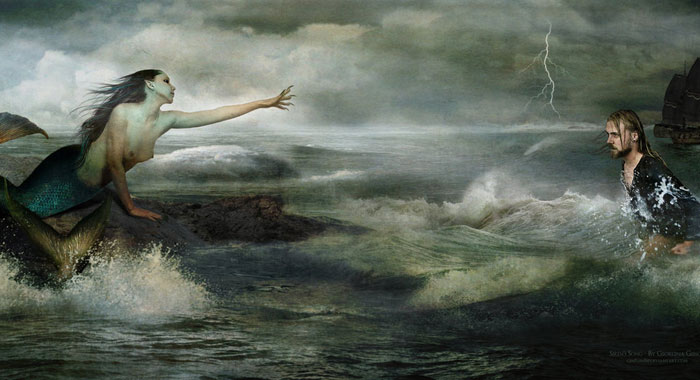 Hubris: In its ancient Greek context, it describes actions rooted in excessive pride and arrogance that defy established norms of behaviour or challenge the gods, and which therefore bring about the downfall, or nemesis, of its offender.

“First you will come to the Sirens who enchant all who come near them. If anyone unwarily draws in too close and hears the singing of the Sirens, his wife and children will never welcome him home again, for they sit in a green field and warble him to death with the sweetness of their song” (Homer, The Odyssey, Book XII, 8th century BC).

Homer tells the story of Odysseus—also known as Ulysses—an esteemed warrior who is returning home to the Greek island of Ithaca where he is the king after the victorious Trojan War.

The Odyssey is Homer’s epic poem of Odysseus’ homeward journey.

Odysseus is portrayed as a righteous (i.e., non-hubristic) man who usually pays heed to what the Greek gods tell him. He is especially mindful of advice from the goddess Circe who warns him about the “Sirens”. These two monsters, pretending to be beautiful women with captivating voices, try to convince sailors who pass their island that they merely want to entertain them with charming melodies. What they really want is to kill them. Odysseus obeyed Circe and he and his men were spared.

For several years now, some of our very own Caribbean politicians, having achieved glorious victory in their own Trojan-like wars called electoral politics, have failed to stop up their ears to the compelling siren song of constitutional reform, recklessly indifferent to the timeless warning Circe gave to Ulysses so long ago. The fruit of their hubris has always been their nemesis.

This is my reading of the timing of the upcoming referenda in Antigua/Barbuda and Grenada on the very same day, Nov. 6, asking the people of both nations to allow their nearly identical constitutions to be amended to transfer the final appellate court from the universally revered Judicial Court of the Privy Council (JCPC) to the widely distrusted Caribbean Court of Justice (CCJ) based on their recent landslide election victories.

On March 18, Keith Mitchell’s New National Party (NNP) was catapulted back into power winning all 15 seats, the third time the party achieved such a glorious victory, doing the same in 1999 and again 2013. This represented Mitchell’s fifth non-consecutive term as leader of the NNP and prime minister of Grenada, resulting in a nearly unprecedented 24th year in office.

A mere three days later in Antigua and Barbuda, another electoral rout took place when the Antigua and Barbuda Labour Party (ABLP) led by Prime Minister Gaston Browne won 15 of the 17 seats in the House of Representatives after winning 14 seats in 2014.

Is there any better time to call a constitutional referendum than when victorious leaders are so full of hubris?

Alas, like their counterparts around the world, Caribbean politicians seem to have very short memories, at least when it comes to the fate of their peers, never mind the warning of ancient Greek gods.

Ralph Gonsalves, Prime Minister of St. Vincent and the Grenadines, easily defeated an inept opposition New Democratic Party 12-3 in two consecutive elections (2001 and 2005) yet still met his nemesis in the form of a proverbial Caribbean political “cut backside” when his attempt to impose a brand new constitution was soundly rejected by the electorate in 2009 when 55 per cent of citizens voted “no” to abolishing appeals to the JCPC and removing the country’s beloved Queen Elizabeth II as head of state, along with other changes they found distasteful.

A year later, on Dec. 13, 2010, Gonsalves’ Unity Labour Party barely retained power by winning the national election by a single seat and a razor-thin 51 per cent popular majority.

If he had only ignored the song of the Sirens!

Still, it seems that his Grenadian counterpart, Mitchell, has not only defied the ancient Greeks while scorning the experience of Gonsalves, he has even forgotten or hubristically dismissed the painful lessons of Grenada’s history together with his own recent popular nemesis when trying to meddle with the constitution.

Grenada’s history includes independence from the United Kingdom in 1974, which granted the nation a new constitution with a modified Westminster parliamentary system along the lines of most other British West Indian colonies.

The execution of Bishop and many of his followers by even more extreme elements in the NJM caused chaos in the country leading to its speedy liberation in 1983 by the United States under the bold leadership of Ronald Reagan. Because the NJM had been unconstitutionally imposed on the people, the previous constitution was restored.

The date of the ouster of the NJM, Oct. 25, is now a national holiday in Grenada called Thanksgiving Day which commemorates the freeing, after the liberation, of several political prisoners who were subsequently elected to office.

Having forgotten this hard historical lesson of constitutional subversion and lured by the Sirens, Mitchell, hubristically believing that his 2013 knock-out of the opposition would guarantee a huge popular victory on a very different set of issues, ordered a constitutional referendum for Nov. 24, 2016. Voters were asked whether they approved of seven amendments, each voted on separately. According to the restored original constitution, each amendment had to be accepted by two-thirds of the electorate. Nemesis called again and all seven proposals were soundly rejected by the citizenry. Approval of the CCJ receiving only 43 per cent of the vote.

As a follower of the Greek Oracle of Delphi, I am convinced that both referenda on Nov. 6 will see a “cut ass”, nemesis-style, for both the compulsively hubristic Mitchell and his Antigua-Barbuda counterpart, Gaston Browne.

This is the second in a series of essays on Caribbean constitutional reform, with special reference to the Caribbean Court of Justice. The articles are all listed here.