Of the 10 Commandments, sins and the making of laws 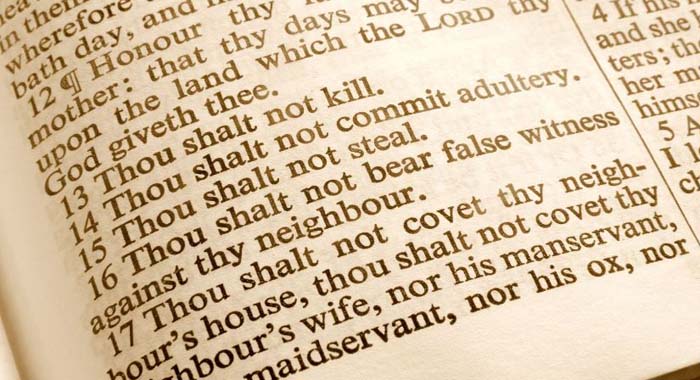 Within the Judeo-Christian ethic, where Christianity falls, the Ten Commandments indicate what God considers right and wrong, in other words, what is moral.

The question of laws of the state, while they may have basis in morality, is not entirely a moral matter.

There was a time when slavery was legal, when Apartheid was legal, when it was illegal for women to vote, or for blacks to vote or even ride at the front of the bus. So what is legal is not always moral. For those who argue that the law of the land must be based on the moral law of God, the question then is how do you translate the Ten Commandments into the penal code? The fourth commandment says, “Remember the Sabbath day to keep it holy, six days shall though labour and do all thy work, but the seventh day is the Sabbath of Yahweh your Elohim…”.

Some scholars claim that the Sabbath law is foundational to God’s creatorship and lordship over the universe and establishes his claim on the world and us as his creatures. Should such a foundational law be part of the law of the state? Should the serious sin of Sabbath-breaking be criminalised? If not, why not? How about stealing or killing?

Stealing or killing infringes on the right and property of another person. How about adultery? Should it be criminalised by our laws? How about marrying more than one wife? Should that be criminalised? The biblical patriarchs had more than one wife. One, in particular, had hundreds of concubines in addition to hundreds more wives, yet he was named the wisest man who ever lived and given the honour of building the Temple of God, a privilege denied to his father by God because, David was, as the scripture documents this, a warmonger.

The question again is: “How do we translate the Ten Commandments into the exercise of lawmaking in a modern society?”.

Let’s go back a bit to stealing, lying and killing. Clearly, these are acts against the property or personhood of another person. We can see how persons in a group, like the state, will have to address these sins (moral) or acts of wrong or infringement of another’s rights (legal perspective). Someone can argue that marriage, by its very act, involves two persons, under oath, giving themselves to each other as property to each other, and in so doing, rights related to property can be argued here (This is not my view here). So should this perspective be applied to marriages to criminalise adultery because of infringement of the contractual rights and property (if you take that view) of someone else?

I do not think for most that the argument about buggering, extended to homosexual and lesbian love-making, is that they are not immoral and sinful. Most people who subscribe to the Christian religion would say unequivocally that they are sins, as much as stealing or Sabbath-breaking is a sin. Very few would venture to say God treats these sins as bigger and more sinful than others. The sinful nature of these things, given our religious basis, is beyond debate. What then is the current debate?

Topically, the debate is whether private, consenting same-sex relations in all its forms among adults should be criminalised. More specifically, the question is whether the sin of buggery, including homosexual sin, be singled out for criminalisation. If you say it should. Why?

This is my view:

In the matter of translating God’s moral law — the Ten Commandments — into the penal code of a country, one has to first establish the principles for that translation. I believe private, consensual non-rights-infringing behaviour among adults, including homosexual or heterosexual anal penetration, should not be something the state must take an explicit position on. Something being sinful doesn’t have to make it criminal too. There are some things the state cannot and should not mediate. This is one of them. Just like I believe, that Sabbath-keeping — though it goes to the heart of God’s creatorship and lordship and is deemed a sin against God himself – should not be mediated by any state.

It is wholly unfair and disingenuous to conflate these issues and say that because someone believes that these acts should not be criminalised, he or she is morally compromised or against God’s will for mankind. We need to have a more grounded discussion on the issue of morality and legality and sin and crime. Until we have a proper and principled discussion there would be all sorts of noise and distrust and acrimony about these issues that fight against a proper understanding and practice of the church in the state and the state in the church.

2 replies on “Of the 10 Commandments, sins and the making of laws”