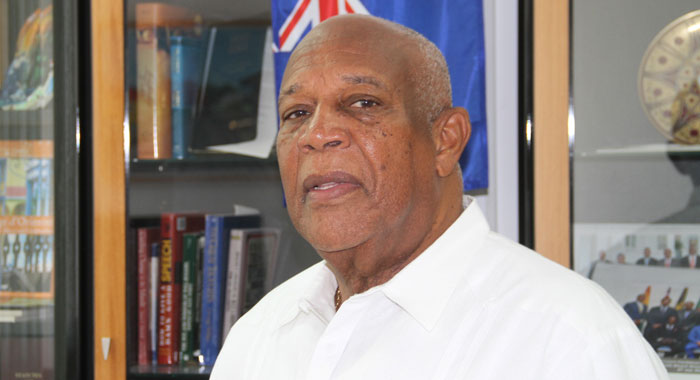 THE VALLEY, Anguilla (CMC) — Chief Minister Victor Banks says he is pleased with the progress this British Overseas Territory has made in the year since it was impacted by Hurricane Irma that also devastated a number of other Caribbean countries.

“I am extremely satisfied. I think we have done extremely well in Anguilla with the recovery process, as opposed to a number of other places that are still suffering as a result of it,” Banks told the Caribbean Media Corporation (CMC).

Irma was the strongest storm on record to exist in the open Atlantic region and claimed at least 130 lives as it made its way through the Lesser Antilles last September. The storm left USS64.76 billion in damage, making it the fifth-costliest tropical cyclone on record.

But one year later, Banks was happy to report that the electricity grid in Anguilla and the island’s telecommunications services were operating again.

“… the schools, have plans in place for reconstruction and rehabilitation, the port facilities at Blowing Point are being restored, the building has not started yet but we have put in place some temporary arrangements that we are improving on, as we speak, for the tourism season — a much more permanent temporary arrangement than the ones we have now in preparation for the construction of a state of the art terminal building in that area,” he told CMC.

The airport, an important piece of infrastructure in this tourism-dependent nation, is functional and is preparing to accept night flights.

“So, generally, I think that we have come a long way, restored ourselves to a level of normalcy,” Banks said, adding “the community is getting it together.

“Homes are being rebuilt, repaired and there are still a small group of persons, especially persons who had challenges with their homes even before hurricane Irma that we still have to provide assistance for,” he said, adding that Hurricane Irma was the most severe weather event of recorded history to make landfall.

“It was a Category 5 and being a part of the experience myself, I know the winds were gusting. It has been recorded way over 185 miles per hour (mph). Some persons have reported somewhere in the region of 210 mph.”

Banks said he was grateful that the storm was a fast-moving one, passing over the 91 km square island, which is approximately 16 miles long by three miles wide, in six to seven hours.

The 70-year-old politician said that other storms have taken up to 12 and as much as 18 hours to pass over the island.

Electricity was restored to the entire island in December 2017, just three months after the hurricane.

Anguilla relies heavily on tourism and, for the most part, the hotel plants were severely damaged.

“As a consequence, many of the properties were not able to open before the first quarter of this year. Obviously, with the hotel plants down, being the main provider of employment, some two to three thousand persons were directly affected in that sector, not to mention the businesses that provide services and support for that sector as well.

“So customs revenue being our main source of income and accommodation tax being the other, you would imagine how this would have impacted our economy.”

As regards housing, Banks told CMC that Anguilla was fortunate in that construction is informed by the experience of major hurricanes such as Hurricane Donna in 1960 and Hurricane Louise in 1995.

“The kind destruction that came, as a result, encouraged persons to build more study homes, so, I would say 75 per cent of the homes in Anguilla have concrete roofing. As a consequence, most of the damage was to windows and doors, and in those cases where there were other forms of roofing, maybe 30 to 40 per cent of those homes were damaged again.”

The road infrastructure was not severely damaged but there are areas where there is need for support, he said, noting that the community and extended families came together and made sure that persons did not remain in emergency shelters for extended periods of time.

Banks, however, said there are a number of persons who still have severe damage to their homes, which they are in the process of rebuilding.

And while, in some cases, the insurance companies, “came out very well and people were able to respond to the damage within a short period of time” there are still instances where the insurers were not as ready in providing support as expected.

“… but there is a definite move to correct that issue and try to find as much support as possible,” Banks said, noting that some persons were not insured and would need assistance from several agencies, including the government, persons in the community, and philanthropic organisations.

“The hotel sector came together and formed a relief fund that supported a number of persons across the island and the government put in place a small programme of assistance for person who would have lost doors, windows and certain other issues impacting their homes, as well as the need for persons who are out of work.”

The Chief Minister said that his administration provided a compensation programme for persons who lost jobs in the hotel sector as a result of Hurricane Irma.

They were provided with support over the last six months after the storm to get them back on track, meet some of their obligations and prepare themselves for the workplace, he said, noting that while the population was generally prepared, he observed that too many persons waited until the last minute to do so.

“The level of preparedness took place over a shorter period than is advisable. I think that we need to put programme for readiness is in place much earlier,” he told CMC.