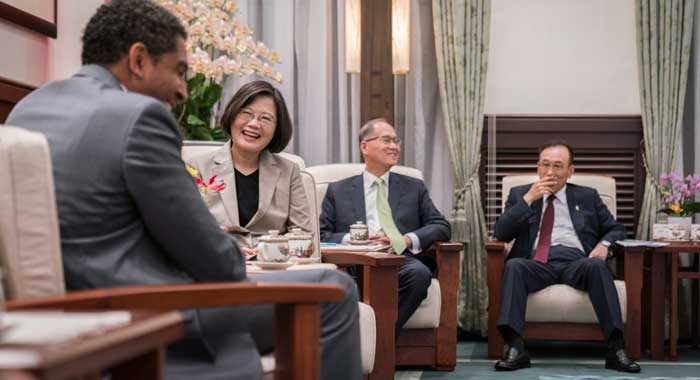 The Government of St. Vincent and the Grenadines has signed a letter of intent with the Export-Import Bank of the Republic of China (Taiwan), which governs a loan facility of US$50 million to the government of SVG for the construction of a hotel at Mt Wynne.

The loan, however, will only be finalised with the approval of the Parliament in Kingstown.

Asked on Monday at a press conference about the terms and conditions of the loan, Minister of Finance, Camillo Gonsalves, said he would speak to that when the loan is brought to Parliament.

“But what I can say, the loan rate is LIBOR plus 1.2 per cent so that will be at current rate, just under 4 per cent loan, two-year grace and I believe it’s a 25-year term.”

LIBOR is the average interbank interest rate at which a selection of banks on the London money market are prepared to lend to one another.

Gonsalves signed the letter of intent on Sept. 19 during a visit to Taipei at the helm of a four-member delegation.

He reiterated at Monday’s press conference that his Unity Labour Party administration intends to add 350 rooms of state-owned hotel space.

Construction of a 250-room, state-owned hotel at Mt Wynne is being targeted for the first quarter of next year, with the chance of a groundbreaking before year-end, he said.

The finance minister said the reason for the construction is that the International Airport at Argyle is getting important and valuable airlift, including weekly flights to Canada, New York, and Miami.

“And in order for us to increase airlift, we have to increase rooms. We have to have more rooms if we want more planes,” he said.

He said his government has paid attention to the development of tourism in neighbouring countries “and the degree to which, sometimes, the tourism development does not, necessarily, benefit as much as it could the citizens of the country.

“And there are a lot of countries now in the news in our region where their tourism numbers are higher than ever before but their economy is not growing at a rate that reflects these high tourism numbers.

“You have one minister come out and say, ‘Great news is tourism is up a hundred per cent.’ and then the minister of finance would come out the next day and say, ‘Bad news is we have to go to the IMF.’ and those two things don’t seem to gel in some situations,” he said.

Gonsalves said that his government thinks that one of the things it can do in the early days of its tourism development is “maintain a little bit more control over the quality of the hotel and the standards and setting the bar at a particular level to define where we want St. Vincent and the Grenadines to be as a tourism destination…

“You notice that I said we hope to build 350 rooms. So if you do the math, you know that there is another hundred rooms coming somewhere else but I don’t want to make that announcement right now. I want to focus on the larger of the two hotels, which is the facility at Mt Wynne.”

The minister said the government has engaged “in very, very fruitful discussions with a major hotel brand.

“We have an agreement with that brand. They will manage the hotel that we construct and we will construct it in such a way that it meets all of their quality standards and the various specifications that that brand has. But it’s our hotel and we are building it.”

Gonsalves said two architects, in consultation with the hotel brand that will manage the hotel, have generated design concepts for the government.

“They came to St. Vincent and the Grenadines, they visited Mt Wynne, we shared with them out topographical maps and all the other technical information and they produced for us concept designs independently.”

He said there is a committee headed by the Ministry of Tourism, Invest SVG and himself “to evaluate these concept designs, to massage the process, to figure out which of the two we prefer”.

He said architects are refining the government’s feedback and are expected to report back in a week or two.

One of the two architects will be chosen to produce the detailed designs of the hotel.

“They anticipate that the entire process would conclude very early in 2019 – the design process, but, of course, prior to that, cleaning of the land, doing some of the work with the infrastructure that has to go into the Mt Wynne site can begin in advance of that.”

He said the hotel is expected to begin operating 30 months after construction begins.