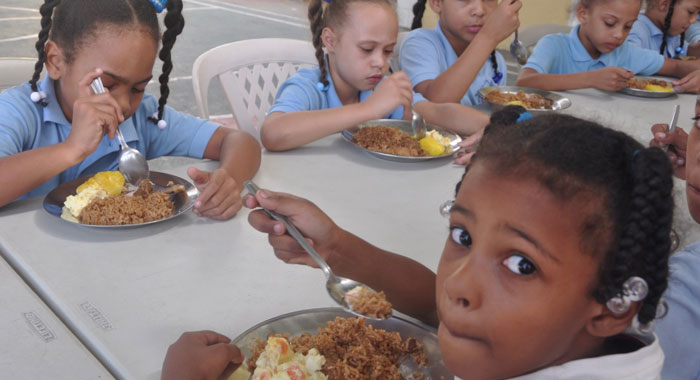 The school feeding programme (SFP) has been identified as an avenue through which health and employment can be improved in the Caribbean while boosting agriculture and reducing the high food import bill.

“It is a powerful social tool that could be used to influence the way we eat, to influence our health, and to influence the local production of food,” says Lystra Fletcher-Paul, the United Nations Food and Agricultural Organisation’s sub-regional coordinator for the Caribbean.

During Caribbean Week of Agriculture, taking place here from Oct. 8-12, St. Vincent and the Grenadines (SVG) and Jamaica were among the Caribbean nations sharing their experiences with the SFP.

A workshop forming part of the one-week event, being held under the theme “Strengthening Agriculture for a Healthier Caribbean”, heard that between 2016 and 2017, in SVG, 58 per cent students in the nation’s 64 primary schools and 7,500 pre-schoolers accessed the programme.

Management of the programme takes place on two levels.

The Ministry of Education being responsible for elements such as providing guidance on menus and procuring food items, and assessment of means and meal preparation.

The Ministry of Health is responsible for meal standards.

Kingstown says the way forward includes revising and creating menus that will encourage healthy eating habits in children and eliminate the consumption of processed foods which contain high levels of salt, unhealthy fats and harmful chemicals.

The programme hopes to increase the consumption of natural and local produce such as ground provisions, fruits, vegetables, peas and beans.

It also envisages encouraging the development of school gardens to be used as teaching tool for nutrition education.

In Jamaica, the SFP is one of the oldest and largest of the government’s social safety nets, benefiting over 247,000 students in 2017-2018, with a budget of some US$34 million

The mission is to provide meals that are nutritious, tasty, safe to eat, which help children to be strong and healthy, and to learn well in school.

Kingston says the benefits of the programme include motivating parents to enrol their children in school and ensure they attend regularly.

It alleviates short-term hunger in students thereby helping to increase their attention and concentration span and by so doing, increase the gains in cognitive function and learning.

Jamaica says its SFP also reduces absenteeism, increases the time spent in school and produces economic gains in the long run, as fewer persons are becoming sick and there is a more productive workforce

The programme has led to a decrease in the rate of obesity among children even as a weakness is the stigma that some students attach to the programme.

In an interview with reporters at CWA, Fletcher-Paul noted that in a number of countries, SFPs are managed either by the education or health ministry.

“And the Ministry of Agriculture has an important role to play, especially if you are talking about changing the diet so that you have a more healthy, nutritious diet. We no longer want the diet where you have lots of pasta and sugary drinks, etc.”

She said the ministry does have a role to play in linking the programme with farmers who can produce the food to substitute unhealthy alternatives.

“So you are talking about using cassava, lettuce, tomato, using local fruit juices in the diet.”

The SFP, therefore, provides that opportunity for inter-ministerial collaboration and linkages. Banning sugary drinks in schools and mandating that a certain percentage of the meals must come from local producers or even helping at the level of sugar taxes.

“Look at it from a wide point of view, not just school feeding from the point of view of providing a healthy meal for one child, especially poor children, for social protection, but also it’s a means of teaching healthy lifelong eating habits, because you are doing nutrition education.”

The FAO is using the Brazilian model, which has six components, including inter-ministerial linkages, a livelihood for farmers, nutrition education, social partnership — including parents and teacher, infrastructure.

“This is an opportunity for the private sector to become involved because in some cases, the private sector can adopt a school where they can provide funding to upgrade the kitchen facilities in the school for preparation of school meals.”

Therefore the ministries of health, education and agriculture have a role to play in guiding policy and legislation, she said.

“The importance of school feeding programmes cannot be underscored enough as the impact of proper nutrition, particularly during early childhood has a direct and significant impact on educational outcome in children and youth and also plays an important role in helping to combat NDCs and other lifestyle diseases,” he said.