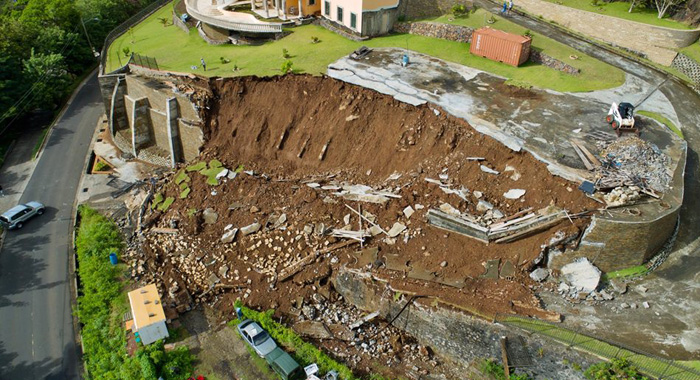 A Steve Wallace aerial photograph of the collapse.

The collapse of the wall around the Jax property in Ratho Mill Sunday night re-opened an old wound for the man whose wife was killed when another portion of the wall collapsed a decade ago.

“I will like to thank everyone for the love and concern shown to me on the opening of an old wound of 10 years ago,” Alban Bowman wrote on Facebook this week.

Bowman’s wife, Patricia Jack-Bowman, 67, died when a car he had bought for her as a gift a few years earlier, was crushed under tonnes of debris when the wall failed on Sept. 19, 2008, after days of torrential rains.

“I will like you to know that I am doing good. I am grounded in the faith of my Lord, the most high,” the widower further wrote.

He added: “I have said little on what has happened. I know a lot on the people who have denied me my justice.

“The old people say a wise head keep a still tongue. I will not be bought and I will not let people think for me or control me.

“I am not greedy and I do not have anything to prove to anyone. I like my independence. I rest these people at the foot of the cross. I have served this country well. I know the trenches of this country and I am proud of what I did. Love to all.”

On Sept. 18, 2009, a five-member coroner’s jury — at the end of an inquest that was closed to the public – – ruled that Jack-Bowman died as a result of negligence on the part of the engineers and contractors who constructed the wall.

The Director of Public Prosecutions, however, decided not to bring criminal charges against those faulted by the coroner’s inquest.

The owners of the property, Alex and Lisa Jack, had hired engineer Glenford Stewart and other contractors to design and build the wall.

Bowman had said that he planned to sue the government and the owners of the wall and had filed a notice of intent.

In 1995, the planning board gave permission for the construction of the wall, which took about five years to complete.