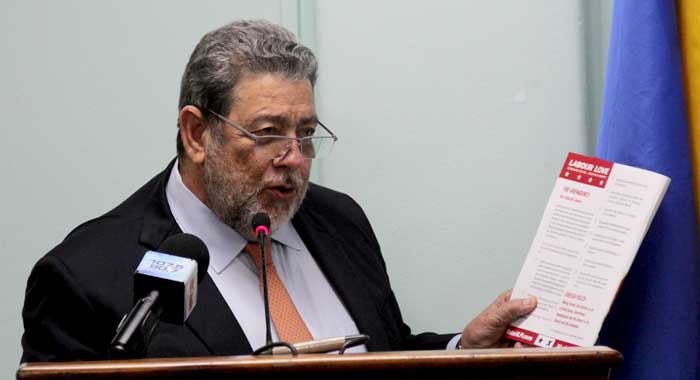 Prime Minister Ralph Gonsalves holds up a copy of his party’s 2015 manifesto at Monday’s consultation with SVG diplomats. (iWN photo)

The Unity Labour Party manifesto on which it was elected to a fourth consecutive term in 2015 permits the government of St. Vincent and the Grenadines to enter into visa waiver agreements.

So said Prime Minister Ralph Gonsalves on Monday, as he noted that the manifesto promised that the ULP administration would “establish diplomatic relations with yet more countries throughout the world to better protect our nation’s interests particularly in migration (visa waivers), investment, trade, development assistance, cultural and sporting links”.

He made the point as he, again, defended his government’s decision to enter into a visa waiver agreement with Russia.

Speaking Monday in Kingstown at the biennial consultation on the nations’ heads of mission and consulates, Gonsalves said:

“It shouldn’t come as any shock, as any surprise. And we want to do so with more and more countries; that’s what it says,” the prime minister said, adding that his country had already signed waivers with Ethiopia.

He said that some people don’t understand that SVG has visa requirements for only seven countries: Syria, Iraq, Iran, Afghanistan, Nigeria, the Dominican Republic and Lebanon.

He said Kingstown regrets having to impose it on Santo Domingo and is considering removing it and is also considering a similar move with Abuja, noting the number of Nigerian students studying medicine in St. Vincent and the Grenadines.