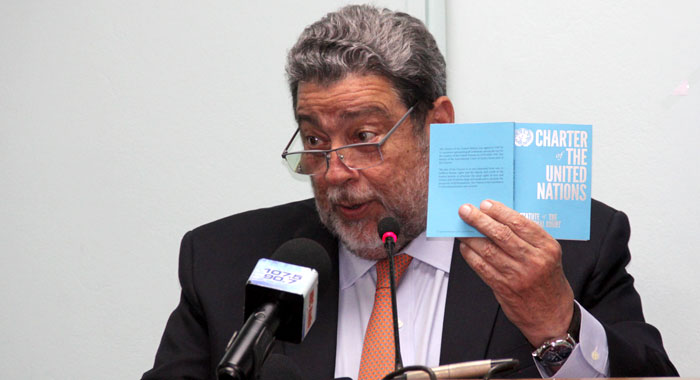 Prime MInister Ralph Gonsalves holds up a copy of the UN Charter at Monday’s event in Kingstown. (iWN photo)

Prime Minister Ralph Gonsalves is urging Vincentians to read the Charter of the United Nations.

He said on Monday the document explains his Unity Labour Party administration’s support for Cuba, Venezuela and Taiwan.

“I urge all people in St. Vincent and the Grenadines and all our diplomats to read this book: the Charter of the United Nations,” he said as he held up a copy of the document on Monday at the opening ceremony of Kingstown’s one-week biennial consultation for heads of missions and consulates.

“Because if you read this, you would not have any confusion as to why we defend the independence and sovereignty of St. Vincent and the Grenadines, and, for example, that of Cuban and Venezuela, and other countries too — if you read this,” Gonsalves said.

“This is the bible of multilateralism. This! This little book; look it up on the internet,” the prime minister further said.

Kingstown, under Gonsalves’ leadership, has maintained strong ties with Havana and Caracas.

Recently, the Gonsalves government has sided with Venezuela as the Organisation of American States attempted to intervene amidst the humanitarian crisis there.

Gonsalves has reiterated his government’s commitment to maintaining ties with Taiwan, which China considers a renegade province and has not ruled out the use of force to achieve its re-unification goal.

Gonsalves said that the ULP’s 2015 manifesto spoke of “a bold, principled foreign policy grounded in our interest but placed on the hub of the Caribbean and Latin America region.

“I want the young people, when you see we are doing certain things, I don’t want you to say, ‘I wonder if the elder, Ralph, losing it, how he defending Venezuela’s independence and sovereignty.

“No, don’t think I losing it; I’m reaffirming your future and I sticking to this. Those who write this and subscribing to this and want to ignore it can ignore it, but, as a small country, this is our defence against arbitrariness and imperial overrule, in the same way that in the domestic setting, the constitution is your protector…”

Gonsalves read the preamble of the charter.

Commenting on it, he said:

“So when we agree to the Paris Accord, we don’t pull out; when the United Nations passes a resolution in relation to a two-state solution on Palestine and Israel, we don’t dismiss that.

“When, annually, the [United Nations] General Assembly passes a resolution supported only by the United States and Israel that the blockade against Cuba is illegal, we take those resolutions seriously because this tells me I must take them seriously.

“Ah can’t be opportunistic about those.”

He noted that the charter says “All Members shall refrain in their international relations from the threat or use of force against the territorial integrity or political independence of any state, or in any other manner inconsistent with the Purposes of the United Nations.”

Gonsalves commented: “So that when somebody tells the press in an off-hand manner that in relation to Venezuela every option is on the table, including military intervention, how do you square that?

“… If we throw this away, is dog eat dog; survival of the fittest. We will be in a state of nature where life is nasty, brutish and short. This is why this is so important — multilateralism.”

The prime minister further noted that the charter says, “The Organisation shall ensure that states which are not Members of the United Nations act in accordance with these Principles so far as may be necessary for the maintenance of international peace and security.”

He said: “And our relations with Taiwan are guided by that principle, because they are not members of the United Nations.”

The ULP administration has remained firm in its support for Taiwan even as the main opposition New Democratic Party has said that if elected to office, it would break ties with Taipei and establish links with Beijing.

Just 17 countries, most of them small developing nations in Africa, the Caribbean and the Pacific, recognise Taiwan as a country independent of China.