Practical ideas win at i² competition 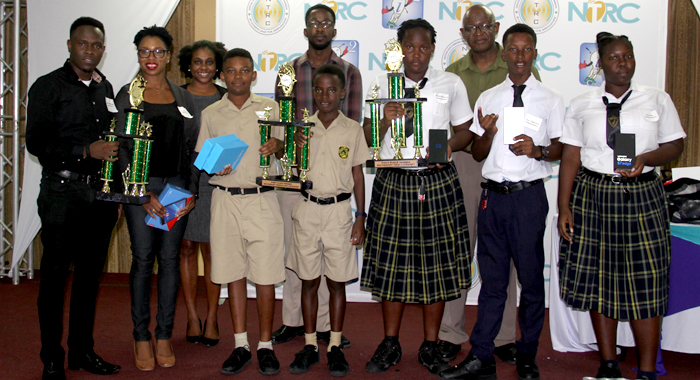 Winners in the 2018 i² Competition and their mentors after Wednesday’s prize giving ceremony in Kingstown. (iWN photo)

Ideas generated by two boys wanting to help their grandmother, a 17-year-old inspired by her paralysed sister, and lab technicians trying to keep their patients better informed, won the top places in the National Telecommunication Regulatory Commission’s i² (iSquared) competition on Wednesday.

Cousins Noah Horne, 12, of South River and Myles Jones, 13 of Richland Park, won the secondary school category of the competition.

Horne, a form 2 student at the St. Vincent Grammar School (SVGS), said their app is “an electronic platform which matches buyers and sellers to manage cost.

He said that he and  Jones, his schoolmate, who call themselves “Teen Titans”, were inspired to develop the concept because of challenges that their grandmother, an itinerant trader in agricultural produce (“trafficker”) faces.

“Like if you are a farmer, which could be a seller, or sometimes you could be a farmer who could be a buyer and a seller, you could go on the app and if you want to buy something, you will see people who are selling. You can call them, contact them and do your stuff.”

Jones, 13, of Richland Park, a 2nd form student at the SVGS, told iWitness News: “… we hope to make it go regional and expand it to poultry. We plant to make it in actual operation”.

Jones is a graduate of the STEM programme, where he did a course in mobile application development.

The winning entry in the Secondary Schools Ideas category was an idea that Rachael Robertson, of Petit Bordel Secondary School’s (PBSS) “Young Inventors”, came up with because her older sister, Sweet-I Robertson, uses a wheelchair.

Sweet-I has been paralysed from the neck down since October 2010 when she was shot in the neck after a social event in Petit Bordel, where she attended secondary school.

“I feel good because all my hard work paid off, finally, for something,” Rachael said.

“We did an app about disability where you can get people from international countries to visit St. Vincent so it would make it easier for them.

“I used my sister as a motivation because my sister is in a wheelchair and travelling was very hard for her,” said Robertson, a 17-year-old Form 4 student of PBSS.

The app is geared toward helping disabled persons, their caregivers and family members to find suitable accommodation and transportation when they visit St. Vincent and the Grenadines.

Under the concept, the person managing the app will post photos of hotel, restaurants and the like, indicating which parts are accessible to disabled persons.

The same will apply to hotels, in that the app would show whether the entire hotel is accessible to disabled persons and if not, which parts are.

“In this way, persons would be able to make a more informed decision about places to visit.

“The app was created to kind of fill a hole that we have been experiencing while at the lab at the Milton Cato Memorial Hospital. A lot of people come unprepared for the tests and so on and a lot of the times, they don’t even have enough money to come back and actually repeat that test that they are not prepared for. That encouraged Mr. Fairbairn to actually come up with the idea to create Med Lab Pro.”

Fairbairn said a user would log in with their credentials and the app opens to a welcome screen with different options, such as test, cost of test, and availability of test. This information would be accessible before the patient visits the lab.

There is also an option for completion of the test.

“For completion of test, you will be given an accession number when you visit the lab for the first time. You enter your accession number on the app and it prompts you so you can view a message whether [the test] is completed or not.

“So it says your test has been completed, you can collect your results and you know ‘yes, I can go and get my results today’. So that saves you from even calling or using bus fare and coming to the lab. It is very cost effective.”

He acknowledged that when it comes to healthcare, people are always concerned about the security of their personal information.

“That has already been covered, where this app is actually running off its own server. So you would not have a problem with anybody hacking. And what we are doing right now is, it is just for information purposes. It is just for the status of your test and when it can be picked up.”

She said she thinks that the app can be fully implemented.

“It is possible,” she said, adding that the team is willing to see it through.

St. Martin Secondary School received the award for the most entries in the competition and received an EC$1,000 reward.

Their mentor received EC$750 in cash.

PBSS Inventors won the second prize of EC$1,000 in cash, while the third prize of EC$800 went to North Union Secondary School Conquerors.

Second place went to Sky Secure of the St. Joseph’s Convent Kingstown, whose members received EC$1,500 in cash and four smartphones from FLOW.

Second in the open category was Dewati Tech, which received EC$2,500 in cash, while the third place winners were “We Are Creators”.

One reply on “Practical ideas win at i² competition”