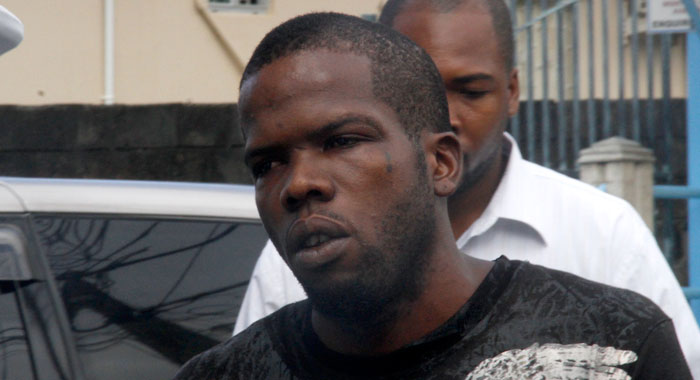 The accused, Dennis Richardson, will know his fate on Dec. 18 (iWN file photo)

A man who was being tried on two counts of using disrespectful language in the precincts of the court disrupted his own witness during cross-examination on Tuesday.

“Calm down! Your constant outbursts are not helping you,” Senior Magistrate Rickie Burnett told the accused man, Dennis Richardson, 25, during the trial at the Kingstown Magistrate’s Court.

Before hearing from Richardson’s second witness, the magistrate would want him not to interrupt the witness during cross examination again.

And, as the prosecution made its closing submission, Prosecutor Police Constable Corlene Samuel, referred to the defendant’s demeanour during the trial.

Burnett said that when he had made the point to Richardson — who did not have a lawyer — about calming himself, he knew that the prosecution would refer to his demeanour in support of a guilty verdict.

The magistrate will give his decision on Dec. 18.

Richardson, a resident of Glen, is charged that on Jan. 29, 2018, at Paul’s Avenue, within the precincts of the Serious Offences Court, where juridical proceedings were held, he showed disrespect in speech, to wit, “Next time, me go spit in she f***ing face or take a f***ing chair and pelt it at she” in reference to chief magistrate Rechanne Browne, before whom such proceedings were held.

He is further charged that on March 27, 2017, within the precincts of the Serious Offences Court, where judicial proceedings were held, he used disrespectful speech, to wit, “I don’t like that magistrate. I don’t f****ng get justice with she. She stinking p***ie mother****. I want to catch she and rest a hand grenade in she mouth”, with reference to chief magistrate Rechanne Browne.

The trial on the March 2017 charge concluded on Tuesday when Richardson’s mother, Cynthia Richardson, and his girlfriend, Susan Samuel testified on his behalf.

Ms Richardson told the court that she normally comes to the court precincts whenever her son has a matter but does not go into the courtroom.

She said she and Samuel were standing outside the ground floor of the two-storey building, near the perimeter wall across from the holding cell when she saw police officers bringing the defendant downstairs.

She said that he complained that the chief magistrate did not want to recuse herself from hearing another matter in which he was a defendant, although he was charged with using disrespectful language toward her.

Ms Richardson said that while there, a lawyer went and spoke to Richardson but she does not know what they spoke about.

After the conversation with Richardson, the lawyer said, “What he is talking is true. He is talking for his right and told Dennis to be quiet,” the woman said.

The mother said she never heard her son use the words complained of.

“Even a mad person would never talk those words in front a police,” said the woman, who repeatedly volunteered that she had not come to court to lie and doing so would disgrace her brother, who is a corporal of police.

During cross examination, Ms Richardson said that she knows her son well and he could be “soft and loud” when upset, but she does not know him to be aggressive.

“He was never aggressive to me,” she said.

“I am putting it to you that that is the second lie you are telling,” the prosecutor said.

The woman, however, maintained that she did not hear the defendant’s voice until he arrived at the landing downstairs.

“He was not talking loud, but he showed that he wasn’t pleased,” she said.

But Ms Richardson maintained that the defendant was not speaking loudly when he was escorted out the courtroom.

He appeared “normal”, she said.

Meanwhile, Samuel told the court that she heard Richardson saying that he was not taking any.

When she asked him what had happened, he said that he didn’t like how a police officer had pushed him.

Samuel said Richardson was speaking loudly, saying that the chief magistrate had refused to recuse herself from his matter although he was charged in a matter involving her.

She said that the defendant said that he does not get any justice from the chief magistrate and if it were in Trinidad or Jamaica “these things couldn’t go on”.

The woman said she told Richardson to be quiet and to cool it.

While she was there, lawyer Israel Bruce came downstairs and went to speak to Richardson, Samuel said.
She said she did not hear what they spoke about, but after the conversation, Bruce said that what Richardson was saying is true.

She said that Richardson then stopped making noise and she left and went to buy him a drink.

However, when she returned, the police officer did not allow her to give him the drink.

She said she did not hear him say the words which form the basis of the complaint.

During cross-examination, the woman, however, told the court that she had heard Richardson talking loudly as he was coming down the steps.

In her closing arguments, the prosecutor said that the Crown has presented a solid case with corroboration among the evidence presented by its witnesses.

She also asked the court to consider Richardson’s demeanour during the trial.

For his part, Richardson told the court that he had written to the High Court, which ordered the chief magistrate to recuse herself from the matter.

He further asked the court to consider the year he spent on remand in connection with the March 2017 charge, and the fact that he is serving a four-year sentence for an unlicensed firearm.

“Why are you speaking to that? Leave that alone,” the magistrate said.

6 replies on “Man charged with disrespecting court interrupts his witness”