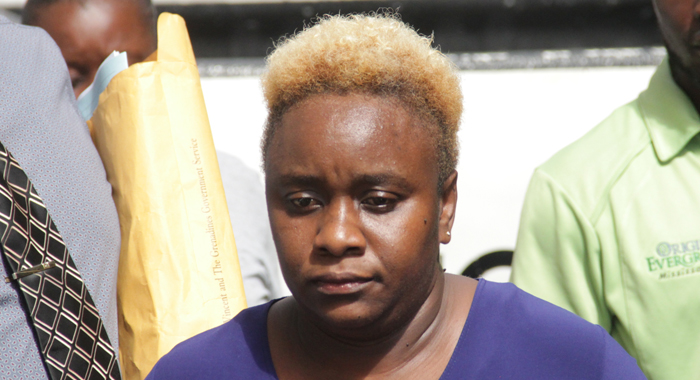 Teacher Je-Anne Jones-Ellis must repay the monies by July 31, 2019 to avoid a prison term. (iWN photo)

“You have some issues, medically. Life-threatening, potentially. So, that, in it itself, is an issue. This (sentencing) is the least of your issues right now. You have some serious issues.”

That was the reaction of Chief Magistrate Rechanne Browne, Thursday, after reading the medical reports of the teacher in the dock who had just pleaded guilty to three counts of stealing cash, amounting to EC$28,435, the property of the Government of St. Vincent and the Grenadines (SVG).

Je-Anne Jones-Ellis, 36, a teacher at St. Martin’s Secondary School, was brought before the magistrate at the Serious Offences Court, in Kingstown, charged that between Oct. 3 and Nov. 11, 2016, she stole EC$210, in cash, the property of the government of St. Vincent and the Grenadines.

According to the facts presented by the prosecution, Jones-Ellis has been attached to the school since 2013 and was responsible for the Book Loan Scheme.

The Book Loan Scheme is a government programme under which students pay EC$50 and are lent some of the textbooks they need for that academic year.

The prosecution told the court that, to date, none of the monies Jones-Ellis collected was deposited at the Treasury Department, as they should have been.

One Mr. Gibson, the deputy principal at the government-assisted secondary school, made a check in respect of the Book Loan Scheme and realised that there were some irregularities.

The matter was reported to the Audit Department, which conducted checks on the school’s Book Loan Scheme and uncovered irregularities.

The matter was then reported to the police, who conducted investigations, which led to the defendant being charged.

During the investigations, the defendant was taken into custody and was cautioned and was electronically interviewed and admitted to the offences.

In that interview, she said she has a medical condition that has been affecting her for years and that she used all the monies for medical purposes.

A search warrant was executed at her home in respect of the report, but nothing was recovered.

In mitigation, Jones-Ellis, who did not have a lawyer, said she admits that what she did was wrong but asked for leniency to repay the amount that was stolen.

The amount “misappropriated” was used solely for medical purposes, she emphasised.

“I am suffering from chronic hypertension, congestive heart failure, pulmonary accreta, and was supposed to do an angiogram to see what is causing the blockage,” the defendant told the court.

She further said that she has problems sleeping at nights.

“Hence, I am asking for a — I don’t know the legal term, correct me if I am wrong — a non-custodial sentence and time to pay, your honour,” Jones-Ellis pleaded.

Senior Prosecutor Adolphus Delplesche, in making representation on behalf of the Crown, said that the defendant made a plea in mitigation grounded in her being chronically ill.

“The matters for which she has pleaded guilty are serious ones and I know the court is guided by the stari decisis principle — that is, like cases should be treated alike,” Delplesche said.

He said that there is precedence regarding the sentencing of people who violated their positions of trust.  “And that is the direction I am thinking,” Delplesche said.

“But this defendant seems to have a peculiar case so I would say if the defendant could produce medical evidence as to the condition from which she is suffering, the court would be better informed and will be in a better position to make the appropriate decision on sentencing.

“I also know — going back to the — principles of stari decisis, cases where persons have presented medicals to mitigate.”

The defendant then told the court that while at the Criminal Investigations Department during the investigation, she had given copies of her medical records to the investigator, detective Corporal Dwight James.

Jones-Ellis told the court that she was discharged from the hospital last week Thursday and the discharge letter details her condition.

The chief magistrate’s reaction came after perusing the medical document presented to the court.

“Your medical situation is very serious,” the chief magistrate said, adding that the woman seems to be between life and death.

The chief magistrate, however, said that her comments were not intended to trivialise the serious nature of the charges.

At this point Jones-Ellis began to cry.

Earlier, Jones-Ellis — while awaiting arraignment — and other persons in the court had laughed as a witness testified in a preliminary inquiry about hiding his jewels and money as armed robbers came into a shop.

The witness said he had in his hand a parcel of sugar he had gone to the shop to buy and he asked the robbers if they wanted that and they said no.

The chief magistrate told Jones-Ellis she hates it and takes a stern position with people violate positions of trust.

“There is a word with three letters that one can always use: ‘ask’,”, the magistrate said.

She noted that once convicted of such a crime, it causes a stain on the person’s reputation and the good that they might have done is no longer remembered.

The chief magistrate suspended the hearing for a few moments to review sentencing precedence in similar and not-so-similar cases.

When the hearing resumed, the chief magistrate noted that the defendant had pleaded guilty at the first opportunity and had expressed remorse.

Browne noted that Jones-Ellis has no previous convictions, adding that the guilty plea also earned the woman one-third discount on the sentence that the court was considering.

She, however, said that the aggravating features were that the woman violated a position of trust, especially one held at a school, where students look up to her as a mentor.

Browne, however, noted that the maximum sentence under the section under which Jones-Ellis was charged was two months in imprisonment.

She said that she was not considering a custodial sentence as a first resort.

The chief magistrate, therefore, ordered Jones-Ellis to repay the government EC$210 forthwith or spend one week in jail.

“I do hope all goes well with you medically because I don’t know what will happen,” the chief magistrate told the woman after handing down the sentences.

iWitness News understands that Jones-Ellis was scheduled to see a doctor in New York on the day she appeared in court.