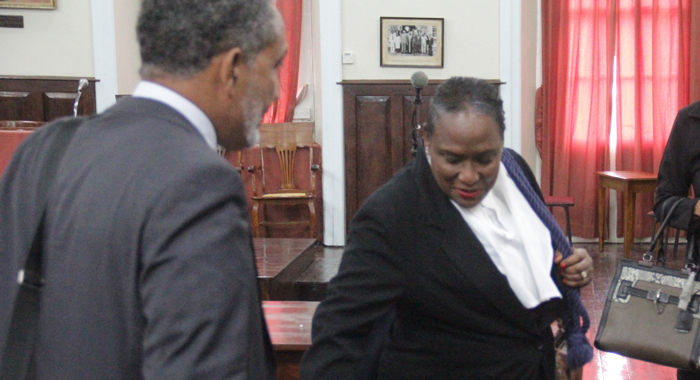 Lawyer for the petitioners, Kay Bacchus-Baptiste, right, and Opposition Leader Godwin Friday prepare to leave the High Court on Friday, after the hearing. (iWN photo)

Both a lawyer for the petitioners and the presiding judge, Justice Esco Henry, on Friday suggested that Members of Parliament Sir Louis Straker and Montgomery Daniel get a new lawyer to represent them in the election petitions case.

The suggestion by Kay Bacchus-Baptiste, a counsel for the petitioners, Benjamin Exeter and Lauron “Sharer” Baptiste, came as she responded to a motion filed by Carlos James.

James, junior counsel for Sir Louis and Daniel, asked that the hearing scheduled for this week, Dec. 3 to 7, be postponed because his senior, Grahame Bollers is unwell.

In responding to the application, Bacchus-Baptiste said she was mindful that a date for the trial was set for September and that those dates were vacated to December.

Documents filed in support of the application to adjourn the hearing say that Bollers “has been becoming progressively unwell over the last three to four months, and experiencing symptoms not inconsistent with cardiovascular problems”.

These symptoms include “shortness of breath, dizziness, chest pains, and neck pains,” the documents say.

“So, to my mind, without some special prognosis… to my mind, it seems that those third respondents, whose reason for asking for this adjournment is that they want Mr. Bollers himself, based on the affidavit evidence, it is quite probable, more than possible, that that the same thing would happen if the adjournment is granted.”

Benjamin Exeter and Lauron “Sharer” Baptiste of the main opposition New Democratic Party (NDP) filed, in December 2015, the two petitions challenging the declared election of Sir Louis and Daniel in the Dec. 9, 2015 polls.

She said the exact arguments made by the respondents could be made with equal or even more force by the petitioners who are alleging that Sir Louis and Daniel have not been elected “but have been there for three years”.

“So, my lady, in the interest of restoring the national certainty, we are urging that if this adjournment is granted, it is for a very short period.”

“If the court is minded to grant an adjournment there must be some undertaking given that the respondents find new counsel at the next sitting and in time to be ready for this trial, because we would not like to get another application for an adjournment because counsel is new and counsel needs time to get up to date with the record…

“This is a matter that involves public interest and a right to [a] free and fair election and the certainty of who our representatives are or are not in parliament and, therefore, my lady, the need for making sure that this does not happen again, if the adjournment is granted,  is very paramount and, as I said, a very short adjournment, if the court is minded to give an adjournment.”

The lawyer said that after reading the medical report on Bollers she was “deeply concerned for the trial and for Mr. Bollers”, adding that the reports underscored the need for the respondents to get new counsel or engage with existing counsel.

For her part, Justice Henry said she suggested to James that he suggest to Sir Louis and Daniel to make every attempt to retain new counsel.

“… because based on the document, I am not a medical person, but on the face of the report and having regard to everything you have said, if we await the prognosis of Mr. Bollers, it would have scheduling the date we have to February 2019 and that will not be in keeping the order of the Court of Appeal, so we have to attempt, as far as possible to fix a date today, if the adjournment is granted, and I see no reason why it should not be granted.”

At the end of the hearing, the judge ordered that Sir Louis and Daniel retain new counsel and be ready for the continuation of the trial on Feb. 11, through March 1.