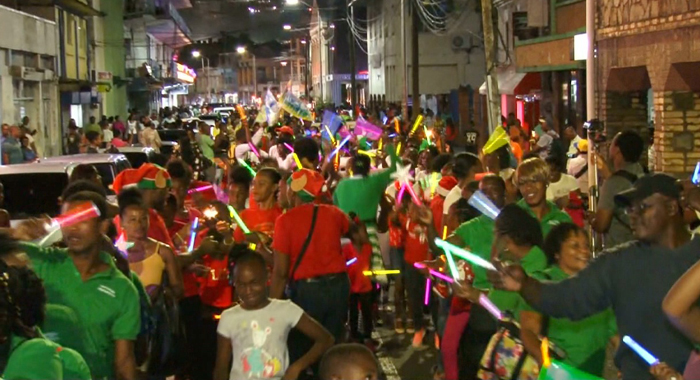 A scene from the parade around Kingstown Sunday night. (iWN photo)

The Ministry of Culture launched the 2018 national Nine Mornings activities with the official lighting up of Heritage Square, Kingstown on Sunday.

The ceremony followed a candlelight march through the streets of the city, which was accompanied by the Royal St. Vincent and the Grenadines Police Band and community groups, some with their own bands.

“I want to say that it is the communities which make this thing happen, we are mainly the facilitators,” he said. He encouraged the audience to visit communities that are staging activities during the Nine Mornings festival, which runs from Dec. 16 to 24.

Minister of Tourism and Culture, Cecil McKie did the official countdown to turn on the lights in the square. The jubilant minister announced that Christmas 2018 would be a “wow” experience for Vincentians as visitor-arrivals are expected to increase and American Airlines will also be making its inaugural trip to the Argyle International Airport on Dec. 15.

Mckie said SVG will receive 58 cruise calls this month, and will also welcome to SVG the yachting event called “Arc”.

“The month of December is an important month for St. Vincent and the Grenadines to shine and each and every one of us, we must play our part,” McKie said.

He said that in 2019 the committee will begin the process to have the festival recognised worldwide as a “world festival”.

The National Nine Mornings Committee also launched its commemorative magazine at Sunday’s event. The committee has also produced other Nine Mornings memorabilia that are available for purchase by the public.

The magazine, according to Michael Peters, chairman of the National Nine Mornings Committee, is the first official document to focus on the Nine Mornings tradition.

The Coulls Hill community will start off the community lighting on Dec. 8. The National Parks, Beaches and Rivers Authority will light up the Botanic Gardens on Dec. 15,