Sex offender lashes out at media 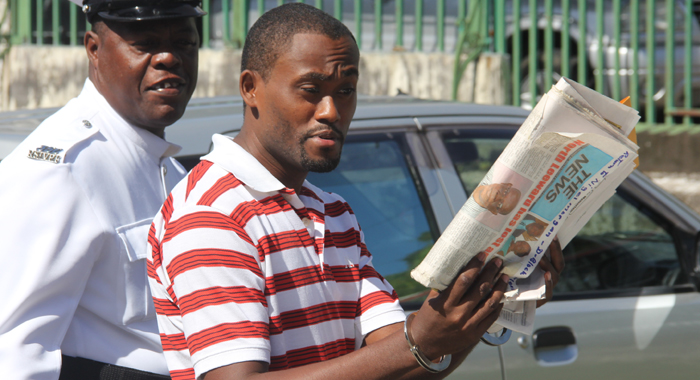 Convicted sex offender, Eugene Noel holds a copy of The News newspaper as he is escorted to prison on Dec. 7. (iWN photo)

Sex offender Eugene Noel, 32, used his sentencing hearing at the High Court on Dec. 7 to attack the media for reporting on his crime.

In what was intended to be his mitigation submissions before sentencing, Noel, who had been convicted of six counts of sex with a 12-year-old girl, said he wanted to call the court’s attention to something “very alarming”.

Noel said it was “very amazing” that since the assizes started, his matter was the only one that caught the attention of the media.
“It went through the whole of the social media, radio station, Facebook — you name it. The only matter that drew the attention of the public,” he said as some lawyers and other members of the public in the visitor’s gallery said that was not the truth.

Noel dedicated his attention to The News and the Searchlight newspapers, social media and Too Cool Chris — of Hot 97, saying that Searchlight reported on his case on the back cover of its Nov. 16 edition — three days after conviction.

“But, for some reason, The News went as far back as something that has gone through the court system and brought it back up…” Noel said.

The newspaper had noted that Noel had been convicted in 2013 of attempting to abduct a 15-year-old girl.

The following week, the newspaper said that it had omitted to say that the conviction and sentence were overturned at appeal.

Noel said that the newspaper report could cause “prejudice” in his matter.

The convicted man read to the court the section of the article that detailed the incident.

The judge, however, told the defendant that The News does not influence him.

Noel said that the following week, The News did last what they should have done initially, when it reported that his conviction and sentence had been overturned.

The judge, again, told the man that media reports have no bearing on the sentencing.

At this point, Noel exclaimed, “The News is the worst newspaper in St. Vincent and the Grenadines, my lord. I will never encourage nobody to buy the newspaper; nobody to buy The News newspaper. They tried to print a certain picture about me and it is damaging to me and my family and my children.”

Noel said that the media reports helped “to surface a lot of comments on social media”, adding that his family was surprised to hear all those comments about him.

“And Too Cool Chris, my Lord. These things are ridiculous,” he said, referring to one of the hosts of Hot 97 FM’s morning show.

The judge asked the man what was the point of referring to that development and he said he was just bringing it to the attention of the court.

“These things lead to public alarms and cause harsh sentence on convicted persons,” Noel said.

“The Morgan family is a good example, just to mention,” he said in an apparent reference to preacher Nigel, his wife, Althia and their daughter, Krystal Morgan who were, in April, jailed for four years for dousing a man with hot water two years earlier.

Mrs. Morgan was an office worker at The News at the time of her crime and conviction.

Noel said he was “very, very disappointed in the findings of the jury”, adding that he never thought he would be convicted of the charges.

He said there are “no aggravating issues” in the case.

As he was being led back to the prison, where he had been remanded since being convicted, Noel held a copy of The News on which was written “Return to Nigel Morgan – D-Block”.

2 replies on “Sex offender lashes out at media”