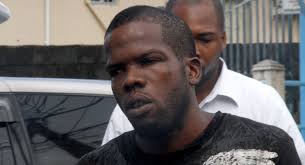 Dennis Richardson will serve a sentence concurrent to one that he is already serving. (iWN photo)

The man tried on two counts of using disrespectful language in the precincts of the court was, on Tuesday, found guilty on both charges and sentenced to jail time.

Senior Magistrate Rickie Burnett handed down the verdict and sentences at the Kingstown Magistrate Court, a month after the trial concluded on Nov. 13.

He sentenced Denis Richardson –who is serving a four-year sentence for an unrelated firearm charge — to three months in prison on each count.

The sentences will run concurrent to his current sentence.

Time spent on remand in relation to the current charge will be deducted from the sentence.

Burnett noted that in his seven years as a magistrate it was the first time that someone was brought before his court charged with these types of offences.

Richardson, a resident of Glen, was charged that on Jan. 29, 2018, at Paul’s Avenue, within the precincts of the Serious Offences Court, where juridical proceedings were held, he showed disrespect in speech, to wit, “Next time, me go spit in she f***ing face or take a f***ing chair and pelt it at she” in reference to chief magistrate Rechanne Browne, before whom such proceedings were held.

He was further charged that on March 27, 2017, within the precincts of the Serious Offences Court, where judicial proceedings were held, he used disrespectful speech, to wit, “I don’t like that magistrate. I don’t f****ng get justice with she. She stinking p***ie mother****. I want to catch she and rest a hand grenade in she mouth”, with reference to chief magistrate Rechanne Browne.

Richardson had defended himself during the trial.