‘ULP is bigger than Ralph’ — Gonsalves 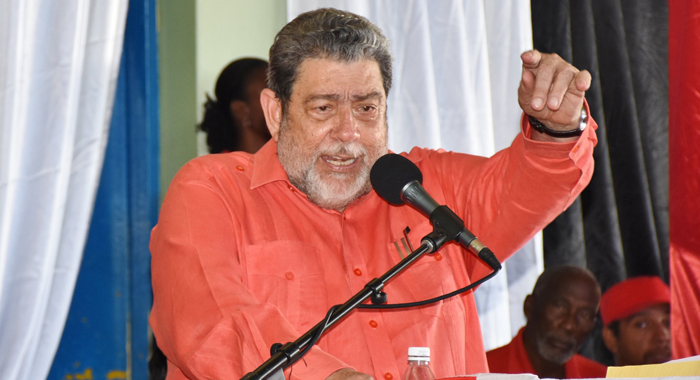 Prime Minister Ralph Gonsalves says that the Unity Labour Party, which he was been leading for more two decades, is bigger than him.

He told the party’s 23rd National Convention on Dec. 9 that the main opposition New Democratic Party (NDP) is “mistaken in their belief that the Unity Labour Party is Ralph.

“The Unity Labour Party is bigger than Ralph and the teaching which Ralph has put forward for the last 20 years and more in this country and for the Unity Labour Party will stand the test of time to keep such people from ever being associated to come to office,” said Gonsalves hours before he was re-elected to lead the party.

At the convention, Gonsalves, along with deputy leader of the ULP Sir Louis Straker, was returned unopposed to their respective posts.

With general elections constitutionally due by March 2021, Gonsalves retention of the ULP’s top post paves the way for him to lead the party into the next polls.

The ULP will be seeking an unprecedented fifth consecutive term in office, after holding on to power in the 2010 and 2015 vote by a one-seat majority.

During the campaign for the 2015 election, Gonsalves had asked the electorate to give him another term to mould a new generation of leaders.

He told the convention that the ULP administration has many projects in the pipeline.

He mentioned the hotel and resort being constructed by foreign investors at Mt Wynne-Peter’s Hope.

He further said that before the end of the year, Parliament would approve the borrowing of US$50 million from the Taiwanese to build a 200-room hotel at Mt Wynne and an airport hotel at Diamond.

“We have the financing arranged for those two: Mt Wynne and the one at Diamond,” he told party supporters and media audiences.

He said that other people are interested in further hotel development and his government is “working steadily on the port in Kingstown and the anchor project, the acute referral hospital for the city out at Arnos Vale to start that off”.

Gonsalves further said that his government is consolidating in education and health as well as expanding in sports and culture and medical cannabis.

4 replies on “‘ULP is bigger than Ralph’ — Gonsalves”