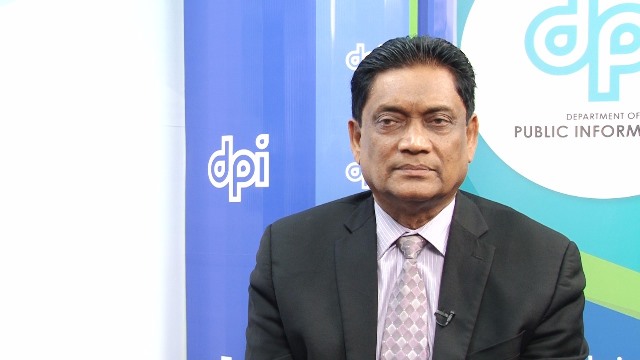 GEORGETOWN, Guyana (Demerara Waves) — Guyanese would most likely go back to the polls in general elections before the end of March 2019, after the opposition People’s Progressive Party (PPP) won its no-confidence motion 33-32 Friday night when Alliance For Change (AFC) back-bencher Charrandas Persaud voted against the government.

“There may be outcomes which are not predictable or outcomes which have not been anticipated, but the outcome has to be accepted and we want our supporters –in particular those who support the coalition government — to understand that we are going back to the polls; this is not the end,” Prime Minister Moses Nagamootoo told a news briefing after a ministerial meeting following the historic vote.

Opposition Leader, Bharrat Jagdeo, who sponsored the no-confidence motion, and Persaud separately rejected claims by pro-government supporters that the AFC legislator sold his vote for millions of dollars.

“The answer is ‘no’. We were hoping that we would get someone or two persons to vote ‘conscience’. I myself was a bit surprised about the arrangement that he voted but I suspect that he comes from the sugar belt too and that’s what I’m thinking, that he comes from the sugar belt and living in that community, he probably saw the hardships,” said Jagdeo in reference to Persaud living and working in Berbice where a number of sugar estates were closed and thousands of workers laid off.

With the last general and regional elections having been held in May 2015, the next polls were due the latest by August 2020.

After speaking with the media, Persaud was whisked out of the building through a back stairway and into a waiting car on Hadfield Street where there was no build-up of anti-PPP supporters. Moments earlier, Ramjattan had asked a police officer to ensure Persaud’s safety.

Government Chief Whip, Amna Ally, declared that Persaud betrayed the government even after he and other lawmakers were asked before the debate had begun whether they had any objections.

“At the meeting here, this afternoon, we asked whether there was anybody with dissenting views and he did not indicate. I think that we were totally betrayed by Mr. Charandass’ actions tonight. He didn’t indicate. We had no indication that that was the way he was going to go,” he said.

Nagamootoo said he was unaware that Persaud had been displeased with the AFC or anyone else, and up to Friday afternoon, before the sitting, there was no indication that he had an issue.

The prime minister noted that Persaud had campaigned with him in Berbice for the Nov. 12 local government elections and only recently had been with him and others at a Christmas activity.

Nagamootoo added that circular was sent telling legislators that “this was not one of the occasions on which one exercises a conscience vote”.

AFC Chairman, Khemraj Ramjattan said Persaud, a practicing attorney-at-law in Berbice, was disloyal and would be expelled from the party.

Persaud, however, said he would be “saving them the time” and would be resigning from the party and the House, which convenes in January.

“I am not keen on being a parliamentarian and those who know me will know that I’m a successful lawyer. I don’t sell my soul. I sold my conscience for three and a half years in this parliament to the detriment of my job. That has now come to an end,” he said.

Nagamootoo said, while the government would be examining its options, it is clear that general elections would be held in 90 days except if the 65-seat national assembly decides otherwise by a two-thirds majority.

Jagdeo sounded a conciliatory tone and appeared to have left the door open for some sort of political cooperation as Guyana heads into commercial oil production by early 2020, though some experts suggest that first oil could be pumped during the last quarter of 2019.

“It is unprecedented and it is pushing our democracy forward and we on both sides of the House have to now sit and talk about how we move forward over the course of the next few months and over the future,” he said.

“We have to find a way now to maximise our national skills and look past the politics of it so that we can in the upcoming era which can be transformative present a united face to the rest of the world,” Jagdeo said.

Nagamootoo appealed to Guyanese to be calm regardless of political persuasion. “We want our people to maintain the peace, the good order, the stability of our country. We want nothing to happen in our society that will affect the stability and peace and we want nothing to happen that will affect the business community in this particular period that you have bright business,” he said.

Persaud, in a prepared statement, said he voted with his conscience due to the many wrongs that had been allegedly perpetrated by the coalition of A Partnership for National Unity+ Alliance For Change (APNU+AFC)-led administration.

“I feel that almost 80 per cent of the Guyanese populace would want to have this government removed just for what has not been done during the three and a half years that APNU/AFC has been in office,” he said.

When Speaker of the National Assembly, Sherlock Isaacs first called the vote on the government benches and Persaud voted “yes”, he caught other government parliamentarians sitting immediately next to him by surprise who nudged him and questioned what he did.

He told them repeatedly that he voted with his conscience — a position he had already taken in the prepared statement to the media.

“My stand has nothing to do with ‘crossing over’. I am not joining up with the PPPC. I want to clear my conscience. Too much wrong has been perpetrated against the people of this country, in too short a time, by this APNU/AFC government. There must be proper rules for them to play by when in high offices and the people must not be taken for granted,” he said, adding that the government has failed to improve Guyanese lives because of “too many square pegs in round holes”.

After Public Health Minister, Volda Lawrence failed to persuade House Speaker Dr. Barton Scotland to grant a short break to resolve the issue over Persaud’s vote, the Speaker asked that the vote by the government benches be called from the beginning.

When it was Persaud’s time to vote, he stressed, “Yes. Yes. Yes.”

Among his grouses are the laying off of thousands of mainly East Indian workers — largely PPP supporters — from the Guyana Sugar Corporation as a result of the closure of a number of estates in Berbice.

Persaud also took umbrage to recent statements by People’s National Congress Reform Chairman, Volda Lawrence at an internal party meeting with Region Four party faithfuls that she would be giving jobs to her friends, all of whom are PNC members.

She also supported the granting of contracts and employment of PNCR supporters. Lawrence had days later apologised to all those who felt offended and assured them that she has always worked for all Guyanese.

4 replies on “Guyana govt falls in no confidence vote”