Several persons in hospital after accident in Kingstown 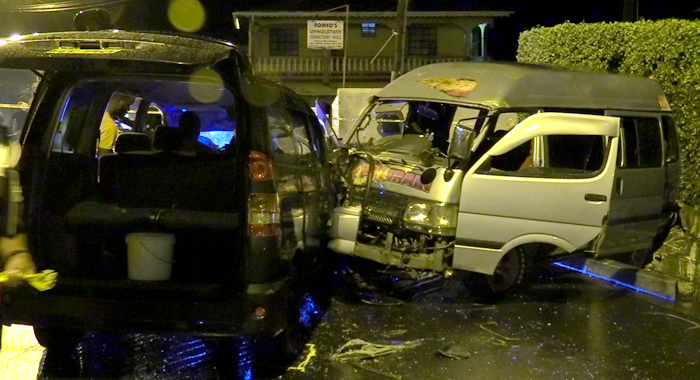 A number of persons were rushed to the Milton Cato Memorial Hospital Friday night after being injured in an accident a few hundred yards away, along the Nelson Mandela Highway.

The number of persons and their condition were not known to iWitness News at the time of publishing this article and were being verified by police.

The accident occurred near Massy Supermarket in Stony Ground, Kingstown, about 8 p.m.

It involved two vehicles, a black compact minivan, HT710, which had an illuminated “taxi” sign on the inside of the front windshield, and a silver minivan, HE850.

Police told iWitness News at the scene that initial investigations reveal that HT710 was travelling in the direction of Kingstown.

The other vehicle, HE850, was travelling away from the city, but was stationary when the accident occurred.

Police say HE850 was the first among at least three vehicles, including an ambulance, which had stopped in the area when the accident occurred.

A witness told iWitness News that HT710 had sped off in the direction of Kingstown immediately before the accident occurred.

The force of the impact was such that it caused the airbags in HT710 to deploy and partly knocked the other vehicle off the street and onto the retaining wall of a property bordering the road.

The accident completely blocked that section of the road resulting in traffic in both directions being diverted.