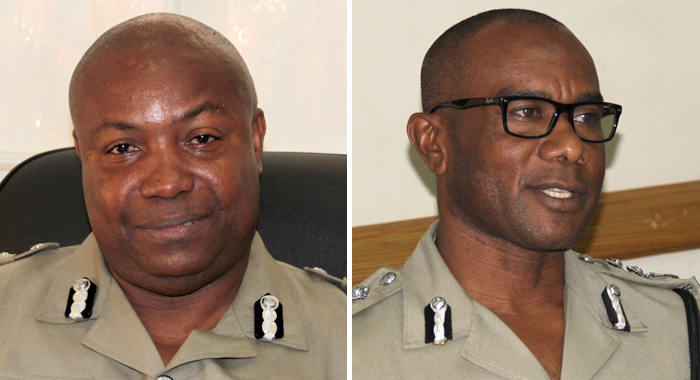 Acting Commissioner of Police Colin John has been confirmed as police chief in St. Vincent and the Grenadines.

John’s confirmation as Commissioner of Police was among a number of promotions that the Police Service Commission announced on Monday, Dec. 31, 2018.

Also confirmed in his post is Deputy Commissioner of Police, Frankie Joseph.

John and Joseph were acting in their post since January 2018, when then acting police chief Renald Hadaway retired and John was promoted from acting Deputy Commissioner to acting commissioner.

Joseph was the most senior assistant commissioner of police before his January 2018 promotion.

The Police Public Relations Department said on Monday that the number of promotion announced on that day — 103 — is the highest in recent years.

The promotions also included the elevation of Richard Browne to the ranks of Assistant Commissioner of Police.

They are Cluston Francis, Joel James, and Trevor Bailey.

Station Sergeants Nolan Dallaway, Dwayne Bailey and Wilmet John have been promoted to the rank of inspector.

Ten sergeants will move one rank up to station sergeant.

“Commissioner of Police, Mr. Colin John congratulates all of the officers who have been promoted and has emphasized that promotion should not just be seen as a personal achievement only but it adds new responsibilities to the recipients. He urges all to take their new responsibilities very seriously in the interest of citizen and national security. The commissioner also takes the opportunity to wish every Vincentian at home and in the diapora, a safe, prosperous and productive New Year,” the department said in a oppress statement.