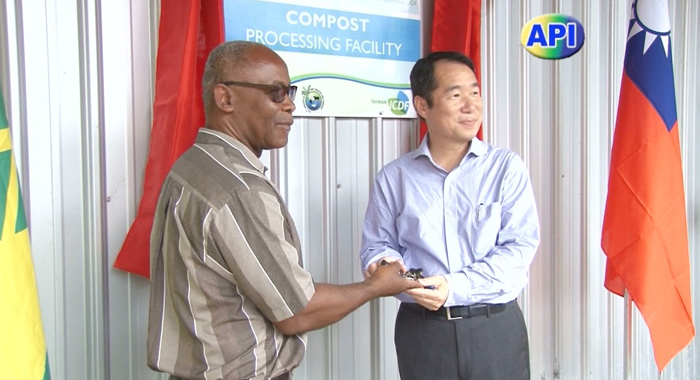 Farmers in St. Vincent and the Grenadines now have the alternative to fully organic crops with the opening of a compost processing facility at the Orange Hill Biotechnology Centre.

The project includes the establishment of eight farmers’ cooperatives, which produce various agricultural commodities; training of farmers and extension officers to strengthen their capacity to aid in the improved management of cooperative organisations; soil sample collection; analysis and fertiliser recommendations; the procurement of equipment; and the outfitting of the probiotics laboratory.

Construction cost of the compost facility was EC$1.5 million.

It is equipped with three bio-digesters, a steam sterilising machine, and other inputs for vegetable seedling production.  The project was executed over a four-year period at a cost of EC$7,273,832.

Addressing the handing over ceremony, Marcus Richards, senior agricultural officer with responsibility for extension and advisory services, described the compost facility as another fruit of the excellent collaboration between Taiwan and SVG.

Cain expressed gratitude to the Government of Taiwan for its assistance and advised all stakeholders to make use of the support from “our friends”.

According to Cain, agriculture in SVG has great potential and he commended Minister  of Agriculture, Saboto Caesar’s leadership, adding that with his “leadership we can go far”.

The chief agricultural officer shared a concern that he has where older persons are leaving the agricultural industry at a higher rate than it is being replenished by younger persons.

Cain noted that this can present a challenge in the near future and stressed the need to engage youths.

Taiwan Ambassador to SVG, Calvin Ho, said he is pleased that his government was able to collaborate with SVG on yet another project.

Ho stated that the two governments have worked closely together on agriculture over the years.

The ambassador disclosed that with the new equipment, 552 soil sample tests have been conducted and 6 metric tonnes of bio-fuel produced.

The project also covered training for eight agriculture officers in Taiwan under the International Cooperation and Development Fund (IDCF).  Ambassador

Ho said more projects will be carried out in the future and they will continue to work with the Ministry of Agriculture to make SVG one of the best agricultural nations in the region.

Meanwhile, Caesar thanked Taiwan for its contribution to SVG.

The agriculture minister Caesar said that when the agricultural history is written in SVG, Taiwan will be featured prominently.

Caesar used the opportunity to highlight health risks associated with chemicals used in the agricultural sector.

He said the ultimate goal is not only to ensure that Vincentians have a constant food supply but that the food consumed is safe.

In light of this, Caesar disclosed that his ministry will be taking serious steps to curtail the importation of foods with high pesticide contents.

He announced that heightened surveillance of imported commodities will be introduced in the first quarter of 2019.