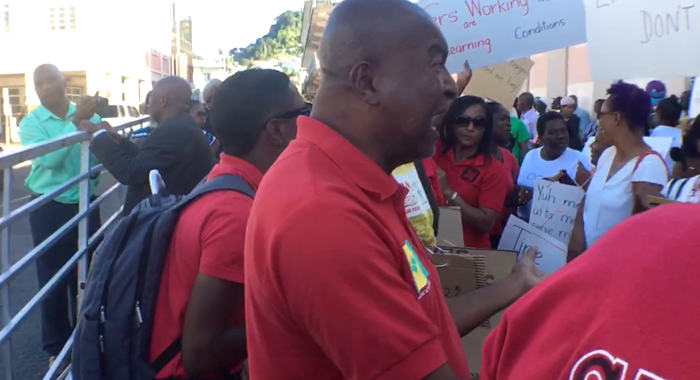 Oswald Robinson, who was president of the St. Vincent and the Grenadines Teachers’ Union when it decided to sue the government over the election leave provision of the 2005 collective agreement, has welcomed the Court of Appeal ruling that the provision is not unconstitutional.

Robinson told iWitness News on Tuesday, hours after the court ruling, that he felt “great” about the decision of the higher court.

“It is an awesome feeling at this time for the teachers, the workers of the country and our three brothers who have suffered as a result of wickedness over those years,” he said as he stood amongst members of the executive of the Teachers’ Union who were picketing Parliament on Tuesday.
The union’s executive, along with that of the Public Service Union, demonstrated as Minister of Finance Camillo Gonsalves presented the Estimates and will do so again next Monday during the Budget presentation to call attention to issues affecting public sector workers.

“And so we are celebrating with our brothers, workers and the teachers’ union as a whole. It has been long, hard battle and we never give up. God has always been on our side and we stayed focused and we fought and we are happy that we have won this great battle,” Robinson told iWitness News.
The union decided to go to court after Prime Minister Ralph Gonsalves said in 2011 that the election leave provision of the collective bargaining agreement that he signed with the union on behalf of his government was unconstitutional and, therefore, “aspirational”.

However, the Court of Appeal overturned that decision and said that the election leave provision was not unconstitutional.
Three teachers, Addison “Bash” Thomas, Kenroy Johnson and Elvis Daniel, resigned their job as nomination day approached after the Public Service Commission pointed them to the Constitution when they applied for election leave.

The three, who contested seats on behalf of the New Democratic Party, were not elected to office and were not rehired to the teaching service.

The court ruled that they must be paid their pensions.

Robinson told iWitness News it was not difficult to convince his union to sue the government.

“If you sign a collective agreement in good faith, which is the case, you should honour your part of the bargain. Doesn’t make any sense that you sign and agree and then you turn back on what you have said.  And so we stayed, our membership guided us, the leadership, everybody and we fought this case through. Right throughout,” Robinson said.