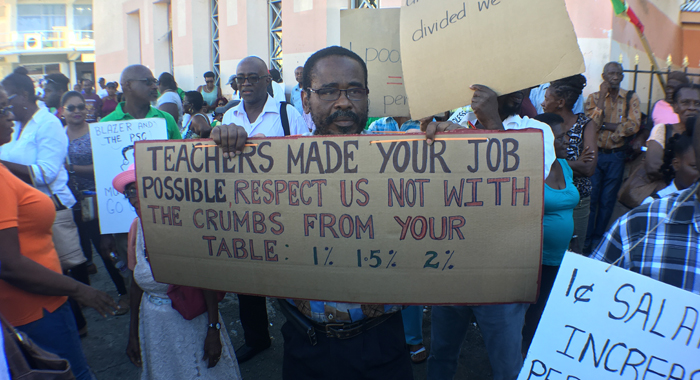 Educator and social commentator Philbert “P John” John says that the 1 per cent salary increase that the government is giving public servants for half of 2018 is “absolutely ridiculous”.

“Look at the … marginal and miniscule 1 per cent that they put on people’s salary for half of 2018. And I say that amounts to half of a per cent for the entire year. And if you take in 2017, when we had none, it’ quarter per cent for the whole period. That’s ridiculous! Absolutely ridiculous! And no union worth its salt would stand that.”

John expressed his view in an interview with iWitness News on the picket line outside Parliament on Tuesday.

The executives of the St. Vincent and the Grenadines Teachers’ Union and the Public Service Union (PSVU) demonstrated as Minister of Finance Camillo Gonsalves presented to Parliament the Estimates of Income and Expenditure for 2019, which amounted to EC$1.067 billion.

While John is not a member of his union’s executive, he told iWitness News that he was there “to support the national executive of the Teachers’ Union in our cause.

“We have a number of outstanding issues with the government. One of the first points I want to raise is the government’s response, which amounts to no response at all to several overtures to the government to come and sit down and talk about certain issues,” said John, who is deputy principal of the Central Leeward Secondary School.

“Our collective agreement, which has been in abeyance since 2008, the terrible conditions facing some of our schools, the problem regarding appointment and promotion, pension reform, we don’t know what the government is doing in relation to that.”

At a Jan. 11 meeting Prime Minister Ralph Gonsalves agreed with the Commercial Technical and Allied Workers Union (CTAWU) and the National Workers Movement (NWM) to a 1 per cent salary increase for half of 2018, 1.5 per cent for 2019, and 2 per cent for 2020.

The executives of the Teachers’ Union, the PSU and the Police Welfare Association did not attend the talks.

They stayed away after being told on arrival at the Office of the Prime Minister, where the meeting was scheduled to take place, that they had to surrender their mobile devices to the police security officer there.

The Teachers’ Union, PSU, and PWA teams refused to surrender their mobile devices and did not attend the talks, saying that they had never had to do so before, and that they were not alerted before arriving for the meeting.

John told iWitness News he appreciates the position of the union leaders who opted not to attend the meeting without their mobile devices.

“I would understand their position, having gone there on several occasions without that being asked of them, it took them by surprise,” he told iWitness News.

“Second point is, a number of these union leaders, including our union leader, walk around with their documents on their devices, their tablets or smart phones. And to ask them, without notice, to leave them outside it’s like asking them to leave their briefcases outside, where all their documents are contained. That’s how I see it,” he said.

He further said that the NWM and the CTAWU — both of which are led by activists for the Unity Labour Party government — cannot negotiate on behalf of public sector workers.

Leader of the CTAWU Joseph “Burns” Bonadie, is paid some EC$80,000 to advise the prime minister on labour matters, a position that many see as a clear conflict of interest.

Told that Bonadie, as well as NWM leader Noel Jackson, have said that the government’s offers are reasonable, John said:

“These are men I respect very much for their contribution to the labour movement but they have disappointed us within recent times,” John told iWitness News.

Regarding pension reform, he said that all parties have to look at the issue.

“Pension reform is probably necessary but, at the same time, we also have to face some of the challenges or problems facing the current pension system.

“Sometimes, the issue of governance could be looked at; the way in which the finances are generally managed. Apparently, that could be one of the reasons why that is such a problem with pensions, or maintaining the status quo.  But I don’t think we should have any problem with meeting or talking about that.

“… I am talking in a generic sense: the way the system, the funds are being managed could contribute to an inability to sustain them.”

John was pleased with the turn out at the protest, noting that other members of the unions had turned out to support the executive.

“It is the beginning. And if you notice, it is supposed to be the executive. The Teachers’ Union executive has nine members.  How many … other teachers are apparently here….

“It’s a technique we have used before. We used it in 1998-2000 and everybody know how that ended up,” he said, referring to the beginning of the protest that brought the then New Democratic Party administration to its knees and forced the early general elections in March 2001, which the Unity Labour Party won.

But told that it is said that lightning does not strike in the same place twice, John said it does sometimes.

“This could probably be one of them.”

He also welcomed Tuesday’s decision of the Court of Appeal, that Article 16 of the 2005 collective agreement that the ULP government signed with the teachers union, guaranteeing election leave was not unconstitutional as Prime Minister Ralph Gonsalves, one of the signatories, later claimed.

“… we have had so many cases from the public sector — teachers, and before that, the Public Service Commission going to the court and we are winning these cases. That must send a message to the authorities. From the Otto Sam case to the PSU case, to the teachers union case. And there are several others that can come….

“The message of the court, and maybe a message across the Caribbean: look at your governance structures because those things point to government, hygiene relative to governance. And I think that is the point the court is making right through,” John told iWitness News.