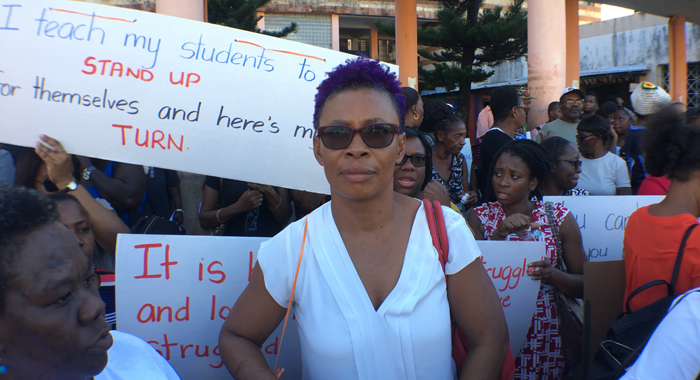 The teacher who was arrested and charged with two counts of obscene publication in relation to posts she allegedly made on Facebook says her mobile device stopped working when police seized it as part of their investigation.

Jozette Bibby-Bowen told iWitness News on the picket line in Kingstown, that she, therefore, agrees with the decision of trade union leaders, last month, not to surrender their mobile phones to police security in order to attend a meeting with prime minister Ralph Gonsalves.

Members of the executive of the St. Vincent and the Grenadines Teachers’ Union, the Public Service Union and the Police Welfare Association refused to hand over their mobile devices and were denied entry to the talks.

They say that they had not been informed ahead of the Jan. 11 meeting, to which Gonsalves invited them, that surrendering their devices was a condition of the talks.

The union leaders said there was never any such pre-condition in their previous meetings with the head of government.

Bibby-Bowen spoke to iWitness News in Kingstown on Jan. 29, where the executive of the Teachers’ Union and the PSU, along with members of the public, picketed Parliament as Minister of Finance, Camillo Gonsalves, presented the Estimates of Income and Expenditure for 2019.

Bibby-Bowen sided with the decision of the union leaders not to hand over their cellphones, which the government says is a requirement of anyone meeting with the prime minister.

“When I was arrested, they took my phone, it never worked when I got it back. Why would I give them my phone?  I am supporting them. Don’t give them no phone. You don’t know what this government is capable of; don’t give up your phone. Simple,” Bibby-Bowen said.

The charge against the former Bishop’s College teacher was later dropped and she was transferred from the classroom to the Adult Education Unit.

Bibby-Bowen said she had decided to participate in the picket in support of the Teachers’ Union.

“I am supporting my union. I am standing resolute with my union,” she said.

She told iWitness News of the issue that had garnered her support.

“Firstly, you (the government) insult me by giving me one per cent [salary increase] last year. And that’s not even one per cent, that’s 0.5 per cent and then this whole pension reform.

“You can’t have us working like donkey and at the end of the day we go home and we’re hungry.  So we goh make sure that when we finish working all them donkey years, we have something we can show we’re comfortable so, of course, they are legitimate reasons,” she told iWitness News.