PETITIONS TRIAL: Figures on election documents seem to have been changed, witness says 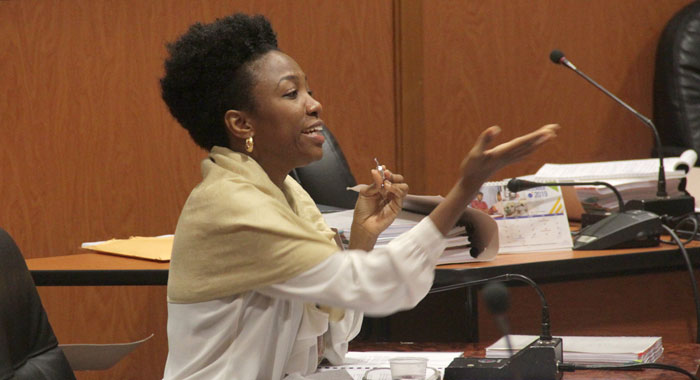 The hearing of oral testimony in the election petitions lawsuits commenced on Monday with the first witness, Maia Eustace rejecting several official documents as different from those she had seen on the day of the final count in Central Leeward on Dec. 10, 2019.

Eustace, a lawyer, and instructing solicitor in one of the two petitions, said she could not accept the Form 16 documents presented to the court as the same that she had seen at the final count.

Eustace accepted the Form 16 from CLA1, CLE, CLF1, and CLH as those she had seen on the day of the final count.

She, however, said that “generally”, there was no case where the polling agents recorded a number different from that of the presiding officer.

Eustace said she was present at the final count of the election in Central Leeward.

She said she was there as the representative of Benjamin Exeter, the main opposition New Democratic Party’s (NDLP) candidate in that constituency.

Exeter has brought the petition challenging the announced victory of the Unity Labour Party’s (ULP) Sir Louis Straker in that district.

At the beginning of her testimony, Eustace tendered her witness statement as her evidence in her case, paving the way for cross examination by Senior Counsel, Douglas Mendes, a Trinidadian lawyer who is lead counsel for the government in the consolidated election cases.

The NDP’s Lauron “Sharer” Baptiste has also filed a petition challenging the election of Montgomery Daniel in North Windward.

During the cross examination, Eustace said that for the 2015 election, she was   a member of the national campaign committee of the NDP.

However, on election day, her named role was that of a roving polling agent for Exeter and to give support to other agents when it was needed.

Eustace said she is the daughter of then NDP leader, Arnhim Eustace, and that the candidates, not the campaign committee, appointed the agents to attend the various polling stations.

Those agents were required to carry with them notebooks, Eustace said, adding that she participated in training sessions where agents were advised to note any objections, any salient information, about the vote and the count on election day.

That information included objections, and incapacitated voters who needed assistance.

The session she attended also advised agents to note any disagreement with the count arrived at on election night.

The witness told the court that her understanding is that tally sheets were provided by the election officers at the count.
She said that while she did not use a tally sheet, she knows they are used to make a contemporaneous record of the votes as they are counted in the preliminary count.

Eustace said she couldn’t recall whether agents were instructed to hand over their notebooks and tally sheets to the NDP after the election.

Eustace is one of the instructing attorneys in Exeter’s petition. She said she took charge of the preparation of the bundle of documents agreed and documents not agreed.

Among the documents she included are the notebooks of the polling agents and their tally sheets.

From the notebooks and the tally sheets, it would have been possible, if the documents had been consulted, for the NDP or herself, to determine the results of the “purported count” at each of the polling stations, the witness told the court.

“Are you saying that the count done by your agents are purported counts?” Mendes asked.

“I am not saying that.  I was not there. I am not casting any aspersions on the agents,” Eustace responded.

“Are you casting aspersions on the count?” the lawyer replied.

“I was not there. That is why I used the word ‘purported’,” Eustace explained, adding that it is not within her purview to say whether the count by anyone present is correct.

Eustace, however, said that she had perused the tally sheet and the tally, and “generally” they seem to correspond.

“Whenever, us lawyers use the word generally, it means there is an exception. Was there and exception?” Mendes asked.

She told the court that she has seen the statement of the polls, except for polling station CL1, adding that she was “very briefly” provided with the statements and was “hurriedly” able to take notes.

“I was not permitted a sufficient period of time to record all of the information on the Form 16 statements when they were shown to me,” Eustace said.

“But you did take notes on that day at the final count?” Mendes asked.

Mendes, however, noted that on some of the form 16s, Eustace had made other notes regarding other things that were happening at the time.

Her recollection was that at various points she had to ask for particular form 16s, Eustace said.

She also did not recall whether she was given all of the forms at once.

The cross-examination of Eustace continues.

The court began hearing the oral evidence amidst concerns by lead counsel for the petitioner, Queens Counsel Stanley “Stalky” John about the size of the NIS Conference Room, where the trial is taking place.

7 replies on “PETITIONS TRIAL: Figures on election documents seem to have been changed, witness says”