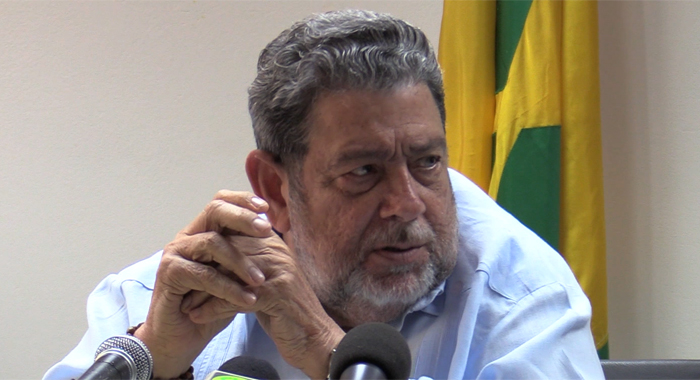 Prime Minister Ralph Gonsalves says that he does not get involved in the conduct of general elections, noting that is the purview of the nation’s elections chief.

He was responding at a press conference in Kingstown, on Wednesday, to a question from a reporter regarding what the reporter described as the government’s opposition to inspection of the ballot boxes.

The High Court has denied a 2015 application by the main opposition New Democratic Party for inspection of the contents of ballot boxes used in Central Leeward in that year’s general election.

The party has brought two petitions challenging the results of that poll and hearing of oral testimony in the case concluded last week and a ruling is slated for March 21.

So far, the court has not ordered inspection of the ballot boxes.

Gonsalves, who has been representing North Central Windward in Parliament for a quarter century said that in that district six persons nominate him as a candidate and he signs agreeing to be nominated.

He said he signs the candidacy declaration as Ralph Gonsalves, candidate, and he leads the campaign of the Unity Labour Party, which he heads.

Gonsalves said issues regarding whether a polling station needs repairs, the Supervisor of Elections would tell the permanent secretary, who gets the resources and reports to him.

“Those are the things I would know about. They would tell me as they would tell everybody else as to what is happening. You see the publication of the notices,” he said.

He said all the foreign election observers have said that the election was free and reflected the will of the people.

“It’s a crazy solution you are coming to ask me to intervene in a case which is going on to do something which petitioners would want, which the court may not be allowing.

“Am I a crazy man? What is my standing? I have no locus standi in that. It’s bizarre. That’s the kind of thing, with great respect, that people talking when they don’t fully grasp what this process is about and what is taking place in the court.”

He further said that the attorney general would organise lawyers for himself and the Supervisor of Election.

“And because I am the Minister of Legal Affairs, he would say this is what I am doing and I would say that seems fine to me. And, the bills come and people have to get paid.”

He, however, said that the government has nothing to do with the lawyers for Deputy Prime Minister Sir Louis Straker and Minister of Housing Montgomery Daniel whose announced victories at the polls in Central Leeward and North Windward the petitions are challenging.

“They have to make arrangements for themselves because they are not sued, they are not brought into the action as ministers. They are brought in as individuals who ran. So I think we need to be very clear. I know the shorthand, government lawyers, and government this,” Gonsalves said.

“So leh me make it plain. Leh me make it one hundred per cent clear. I doh got nutt’n to do with wha’ they have in the court,” the prime minister said.