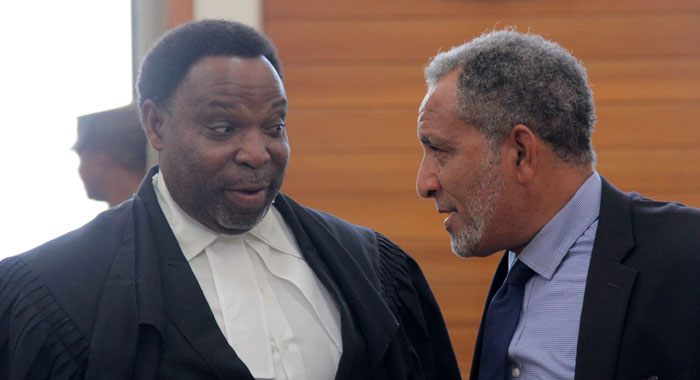 There was “hard swearing on both sides” but the respondent has not corroborated their claim that a reconciliation of the numbers proved that there were not 39 excess counterfoils in the polling station NWI in the December 2015 general election.

That was the argument of Keith Scotland, lead counsel for the petitioner, Lauron “Sharer” Baptiste, who is challenging the announced victory of Montgomery Daniel of the ruling Unity Labour Party.

Agents for the main opposition New Democratic Party (NDP), of which Baptiste is a member have complained that at the end of the vote, there were 366 ballots but 405 counterfoils.

Veronica John, the presiding officer, maintained during the trial that this figure was reconciled.

In his closing submission last Wednesday, Scotland said that while this is the word of John only, the NDP’s witnesses Leon Adams and Kendal Sandy had maintained during the trial that the numbers were never reconciled.

Scotland said that what is instructive is that Sandy’s tally sheet, which was tendered in evidence, has at the top right-hand corner, “405”, the figure he insisted he wrote down at the end of the vote.

On the contrary, the respondents have presented the court with John’s evidence only.  Scotland said there was hard swearing on both sides.

He said that John had the luxury of Utilla Harper, “who flattered to present a witness statement”, but did not see it fit to assist the court.

He noted that Harper is the one who is alleged to have reconciled the count.

The witness for the third respondent, Rosana Clarke, if she had come to testify, may have assisted the court, the lawyer further argued.

“So, what we have is a case of integrity of pleadings. You have two witnesses on behalf of the petitioners and a contemporaneous document with the 405 unresolved and then you have the evidence of Veronica John. But it doesn’t stop there.”

He said that before giving evidence, John changed her evidence without any aide-memoire.

“She was on the way to Tarsus…” Scotland said

In her witness statement, John had originally said that when they counted the counterfoils and ballots, there was a discrepancy between them.

She said that the poll clerk had said there were 179 counterfoils but 140 ballots.

“So, the difference of 39 existed. But, all of a sudden, before she came to testify, without any document, the poll clerk said 405 and I counted 366… “

He added: “When asked how did this change come about, there could be no explanation. She said she remembered 366. In other words, we are saying, her integrity — or her reliability, the weight to be attached to her evidence, as opposed to Sandy, Adams and the documentary evidence is severely diminished.”

“We say even though that represents one polling station, that’s a lot and we can put that in the context of Sandy saying that when Miss John came, she had three ballot books but one had missing in it.”

At this point, the judge, Justice Stanley John asked, “What would be the effect numerically?”

Scotland said that there is a numerical effect, but his argument goes to the process, rather than merely the numbers.

“It will mean that you have 366 persons who voted but you had 405 ballots. The effect will be numerical, but it would be more process. In other words, that procedure must question the integrity of that process.

“Something is wrong because you have 39 more counterfoils than ballots?” Justice John said.

Scotland added: And no witness who can verify it on their behalf came to testify and you have no documentary evidence, save and except KS2,” he said, referring to Sandy’s tally sheet.

The NDP has also filed a petition challenging the outcome of the vote in Central Leeward.

A ruling in the case is scheduled for March 21.