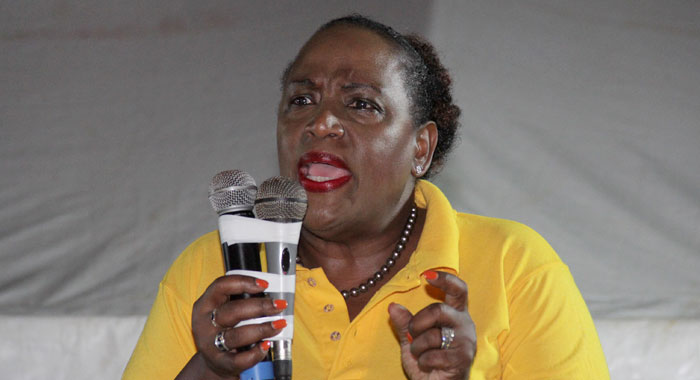 Opposition Senator, Kay Bacchus-Baptiste speaks at the rally of the New Democratic Party in Layou on Saturday. (iWN photo)

An opposition lawyer says that the government of St. Vincent and the Grenadines has spent EC$5 million to pay six or seven lawyers to defend the state in the election petitions case.

Senator Kay Bacchus-Baptiste, who is a lawyer for the petitioners, noted at a New Democratic Party rally in Layou on Saturday that the government has already admitted to spending EC$650,000.

In response to a question by opposition lawmaker St. Clair Leacock, in February, Minister of Finance, Camillo Gonsalves told Parliament that has paid lawyers EC$649,500 to defend the petitions.

But Bacchus-Baptiste told a New Democratic Party rally in Layou that the money spent is now significantly more.

“I understand that this trial cost US$1 million just for Wizard of Oz,” she said, referring to the main lawyer for the government in the case, Senior Counsel Douglas Mendes.

The trial began on Feb. 11 and is expected to end on March 21, when the verdict is handed down.

“Hear this. That does not include the airfare for all of them to come in, the hotel accommodation, the food, the transportation. So, after stealing the election, you have to pay them to come in,” she said.

The New Democratic Party has filed the petitions challenging the outcome of the vote in Central Leeward and North Windward in the 2015 general election.

Bacchus-Baptiste said her party is claiming that over 700 ballots should not have been counted in Central Leeward.

She said 300 of these ballots had absolutely no official mark and the law says they are void.

The lawyer said that a further 300-plus should not have been counted because their secrecy was breached.

She said that in North Windward, the NDP brought a witness who said because of the presiding officer’s handling of the ballots, he saw how 60 persons voted in one polling station.

The witness said that the presiding officer peeked at the ballot to see who people voted for and was very welcoming to ULP supporters and was singing the ULP campaign song “Show me you voting finger”, Bacchus-Baptiste said.