PETITIONS TRIAL: ‘I will not be intimidated!’ lawyer tells court 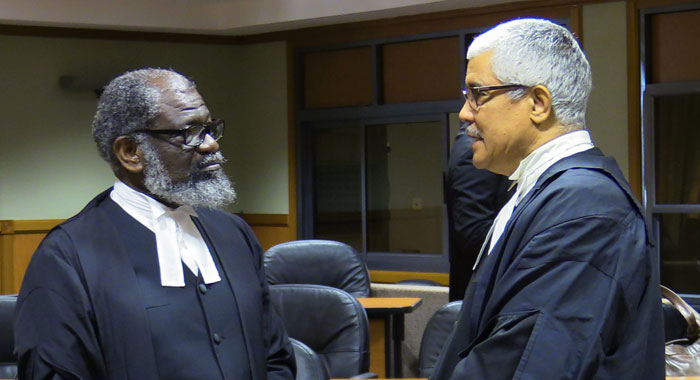 High Court judge Justice Stanley John, on Thursday, suspended hearing in the election petition case for about 20 minutes after a tense moment between the lead counsel on both sides, in which his namesake declared, “I will not be intimidated!

The development came as the lead counsel for the petitioners, Queen Counsel Stanley “Stalky” John and his counterpart for the respondents, Senior Counsel Douglas Mendes, attempted to persuade the bench about the rules that govern closing arguments.

The court ruled that John could not do so.

John said that he can refer the court to the decisions bundle and Mendes said that is the same thing as referring to the closing submission.

“He is referring you, my lord, by indirectly going to the source document of what he has already quoted in his written submissions and he is doing the same thing, he is repeating something that he has already submitted to you.”

The judge said there was no need for John to direct the court at that stage to something said before.

He said that the rules relating to the right to reply are very clear.

“So, Mr John, when you say you want to go back to, you will leave 4.9 and go back to an authority, that must be an authority that was highlighted by the respondent, which you have not had a chance to mention.”

Counsel John said he was referring to an authority referred to by the respondents.

“If I take what my learned friend says logically, then I can’t refer to anything that is in any of the bundles because I had an opportunity to do so. It doesn’t make sense, my lord.

“I must be able to advance the reply, both to the legal argument and address those issues of fact, which my learned friend raised that require a reference to the appropriate parts of the trial bundle, it seems to me.

“There is no rule I am aware of, and I know I am not aware of all the rules of procedure, that establishes that I can’t refer to documents, or issues in the documents that are in my closing submissions. There is absolutely no rule… But if my learned friend is advancing, maybe he can assist your lordship’s court.”

Mendes, who as one point apologised for addressing counsel John directly, said the lawyer began by saying, “Let’s go to my closing submission” and was about to refer the court to a paragraph in his closing submission.

Mendes then said that by definition, John was not responding to an authority that Mendes had put forward but was repeating a submission already made to the court.

Mendes said that John’s next step was to say he would to go the decision bundle.

“The decision by Justice Henry relates to whether or not the point advanced by Mendes in relation to the case of Green has any merit.”

He was referring to legal arguments that Mendes had made that Winston Gaymes, the returning officer for Central Leeward in the 2015 general election, who did not testify at the trial, did not have to respond to the petitioner’s allegation.

“I cannot refer to a decision in this court which establishes the basis upon which your lordship is proceeding? My lord, this business of my learned friend popping up persistently to interrupt my submissions, it’s improper, my lord.”

The judge asked that the proceeding be conducted in an appropriate manner.

“Indeed my lord, but it would not be conducted in that way if my learned friend continues to do so and the court does not intervene that he should do so. I will not be intimidated.”

The judge then said the court would rise for a few minutes.

When the hearing resumed, the judge said he wished to make two statements.

“I wish that to continue.”

Second, he said there are times when he hears comments being made by members of the public and by some attorneys.

“The comments that are inappropriate, I hear and I ask that you desist from so doing. Whenever the court rises, I urge members of the public to leave quietly without making comments, or any of the attorneys,” Justice John said.

One reply on “PETITIONS TRIAL: ‘I will not be intimidated!’ lawyer tells court”