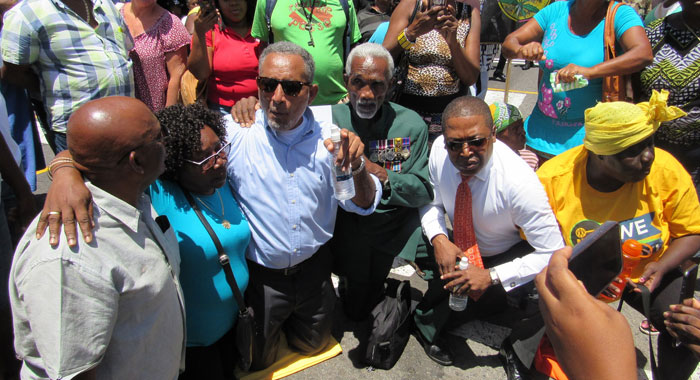 Leader of the Opposition Godwin Friday says his New Democratic Party (NDP) is not done with the two election petitions which the High Court dismissed on Thursday after a full trial.

He, however, said that winning at the polls is the ultimate target.

Friday, speaking to NDP supporters shortly after the ruling, said “what has to happen in St. Vincent and the Grenadines” cannot be accomplished in the courtroom.

“Even if the judge ruled in our favour today, we still have to go back to the polls,” he said.

“So, remember that is the ultimate target. And we ain’t done with the petitions yet you know. Because they told us to stop but we ain’t done yet. We will go forward.”

He said that his party is “resolved to see that justice is done” in SVG.

“We are resolved to bring about change in St. Vincent and the Grenadines because we know we can do better in this country and the team we have assembled for the New Democratic Party will deliver that.”

Pile on the pressure

He called on party supporters to pressure the government to call general elections ahead of the March 2021 constitutional deadline.

“Let us work hard to bring the election forward, put pressure on the institutions of government to bring the elections forward. Bring your neighbours, your friends out, all those people who say they had voted elsewhere but they are now worried about what happened in the country, embrace them.

“Let us bring St. Vincent and the Grenadines into the 21st century. Let us become a country in the Caribbean that people can look up to, not one that always leads in the wrong indices, which is rape or sexual violence, or gun violence, or unemployment.

“We want to make St. Vincent one of the bright lights of the Caribbean. We can do so. Let us do that…  Starting here today, make this your rallying cry. All of us have to work. The lawyers worked very hard and I want to thank them very much….

“Let us continue this fight. Moon ah run till day ketch um and God doh sleep. Justice will prevail. I have every confidence in that and believe me when I tell you we will triumph ultimately…

“You have a brain on your head, you saw what happened in the petitions trial, you make up your mind and let that be the thing that calls you to action.”

Friday, who became Leader of the Opposition and President of the NDP in November 2016, decided to continue with the petitions that were filed under the leadership of his predecessor, Arnhim Eustace.

With Thursday’s court ruling, NDP’s Lauron “Sharer” Baptiste and Benjamin “Ben” Exeter failed in their legal bid to have the elections of Montgomery Daniel and Sir Louis Straker of the ruling Unity Labour Party in North Windward and Central Leeward declared void.

The ULP won the 2015 elections by taking eight of the 15 parliamentary seats while the remaining seven went to the NDP in a repeat of the 2010 results.

Immediately after the ruling, Friday told iWitness News that he would have an informed comment after reading the judgement of the court.

However, he told party supporters outside the court building shortly after that it was a beginning of a new day, politically.

“Consider this a day, a call to action for all, to take responsibility to transform our country,” said Friday, Member of Parliament for the Northern Grenadines, who was first elected in March 2001.

He said that based on what the government said, the petitions were never to go to trial.

“They have delayed it and pushed it back until we have gone almost to the point of the next election. So, they can run as much as they want but we will find them in that corner and we will conquer them and this is where we all will have to play our part.”

The petitions were filed on Dec. 31, 2015 and were the subject of several legal decisions and manoeuvres before coming to trial this past February. General elections are constitutionally due by March 2021.

“This is not a time for us to be sad, this is not a time for mourning. We are stronger, we are tougher than that because we have been at a lower point before and we have risen and so the ultimate challenge is for us in this New Democratic Party to lead St. Vincent and the Grenadines into a better future. That is the promise I have given as the leader of this party. That is the promise that my colleagues who are running as your candidates have given.”

Friday called on party supporters to ensure that persons are registered to vote.

“When the time comes for us to campaign, to convince our neighbours, embrace them, bring them into the fold of the New Democratic Party because it is for all of us to change St. Vincent and the Grenadines.”

The opposition leader said he did not want just to change a government.

He said that while the ruling of the court might seem like a disappointment “it really is a rallying cry for us, it is a chance for us to recommit ourselves to say, ‘Listen, no matter what happened in the court today, we know what we have to do. We know the job that is before us and we will continue with it. And we will use this to make us even stronger and make us even more determined that we bring about change in this country.”