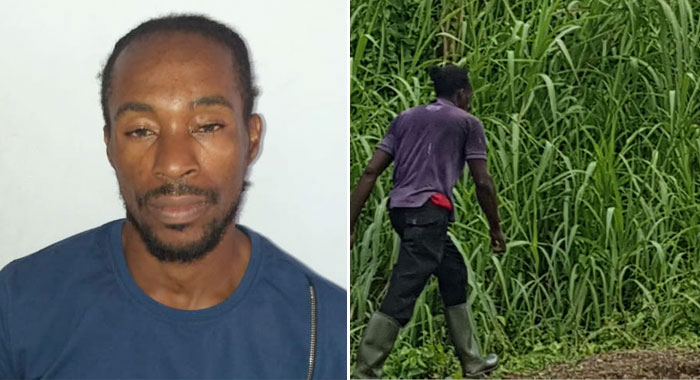 Produce thief Roneil Bobb is photographed as he enters the farm of Grant Connell, who is also a lawyer. The court fined Bobb EC$1,200 for his crime after he offered Connell EC$1,000 in a bid to avoid prosecution.

·  Car involved in theft of produce released before court hearing

· Police station did not have copy of praedial larceny law

·  Soil is SVG’s oil, farmers should be rich

A lawyer and farmer who was recently a victim of theft of his agricultural produce says the case illustrates that law enforcement is not taking seriously, the issue of crimes committed against farmers.

Last week Wednesday, March 13, about 4:30 p.m., the lawyer and farmer, Grant Connell, met a thief on his farm in Congo Valley with a sack containing 150 of his oranges.

The thief, Roneil Bobb, of Richland Park, had a vehicle, PR613 parked on the farm.

Connell called the police, who responded and took Bobb, along with the vehicle, to the Georgetown police station.

And it was from there that several things occurred which, according to the lawyer, illustrates the attitude of the police to the theft of agricultural produce.

“The vehicle was kept there until Friday, when I think it was released. He was charged for theft but I highlighted the point that they are not enforcing the law.

Connell noted that the police had opted to charge Bobb with theft under the Criminal Code, rather than the Agricultural Produce and Livestock (Prevention of Theft) Act, which gives law enforcement sweeping powers against agricultural thieves.

Police didn’t have copy of law

That law, which is commonly referred to as the praedial larceny act, has been in place since 2007, but is seldom used.

“This act gives the police the power — it’s very wide — where they can seize the vehicle that is used to convey the items. They can stop and search and demand a certificate of purchase and it is not being done.

“I don’t know if the police are being lazy or they are not motivated or they simply don’t know the law.”

He said that when he asked at the Georgetown Police Station, which handled the case, he was told that officers did not have a copy of the praedial larceny law.

“I had to present them with it and basically show them the various sections that are applicable,” Connell said.

Connell said he has given an undertaking to make two or three copies of the law available to each police station that is surrounded by farming communities.

“Because the farmers, and farming in general, I don’t think they government or the police have great respect for it,” he said.

He contrasted the attitude of the police when dealing with someone caught with marijuana to when they are dealing with praedial larceny.

Connell said that if the police are conducting a stop and search and catch someone with a sack of marijuana, they usually search the person’s home to see if they are stockpiling the drug there.

“But when you meet somebody with a sack of stolen produce from a farmer, there is no search warrant at his home. He could have a whole storeroom.”

He said that in his case, the thief offered him EC$1,000 to try to avoid prosecution.

“That’s over $6 an orange. Which farmer would refuse that? But then I had to refuse it because most likely, that’s proceeds of crime. Maybe he has stolen oranges from me before and sold them and come up with this money.

“I mean, in this harsh guava crop season, $1,000 just off the bat should send off alarm bells. I refused $1,000; the court demanded $1,200. The reasoning of the magistrate was the sentencing guidelines,” Connell said.

He however noted that under the praedial larceny law, the court could impose a fine of up to EC$10,000 or two years in jail.

In the case involving Connell, Bobb was fined EC$1,200 to be paid in two instalments over a month or six months in jail for each of the payments on which he could have defaulted.

Bobb would have walked out of the court a free man had he not given police a false name, a crime for which he was jailed for one month.

Connell opined that the criminals have the upper hand on the police.

He pointed out that Bobb gave the police a false name and was granted station bail.

“That I find strange as well because the very night, he had six sacks in the back of his car and he did admit that he had other farmers to go and check to get produce. So obviously, this was the beginning of collection. He was dressed in boots and everything — perfectly attired for the farming environment and they granted him station bail.”

The police later rearrested Bobb, charged him with giving them a false name, then granted him station bail again.

“Then he was picked back up because they realised he gave the wrong name and he was still granted station bail even though his name was corrected and he was brought to court.”

Connell said another problem is that the sentencing guidelines handed down from the higher courts, and which magistrates have to observe.

“But, with these sentencing guidelines, the magistrate’s hands, I guess, are tied. But, if these guidelines don’t get further guidelines, we can find ourselves in some serious problems.

“You see the issue where a little girl had a penis stuck in her mouth and we see the outcome there was. Again, the magistrate’s hands are tied when it comes to sentencing. Are we going to just remain and hide behind the law and not amend the law to move with the times?

“I don’t think there is much respect for farmers in St. Vincent and the farming communities. Some farmers are on the breadline and I listen to the farmer’s cry.”

Connell was referring to the case where Ahkino Rhynd, 32, of Canouan, was, in May 2018, jailed for 18 months for rubbing his penis on a 5-year-old girl’s vagina and telling her to suck his penis.

He said that just last week he was speaking to another farmer in the Congo Valley area whose potato field was raided.

“By the grace of God, I have alternative income as a lawyer, but what about the farmers who have to depend solely on the produce, the oranges, the dasheen, the tannia, etc?  It’s very, very frustrating and the powers that be seem not to be too concerned.

“There is legislation, yes, they brought the legislation in place but the police are not enforcing it… I know they didn’t have a copy of the act, so how could they act without knowledge? I think the Director of Public Prosecution’s Office should start an education programme educating the police about what they can and cannot do under this act.”

The soil is SVG’s oil

Connell said that the praedial larceny act is very powerful.

“You can stop a trafficker (itinerant trader in agricultural produce), a truck and demand receipts, demand the origin of these produce and if not, the truck, trafficker and content go to the police station and the act is applied.

“You can go in the market and ask questions and demand answers… Go out on the port on the day of shipping and demand where these came from,” Connell said.

“It’s painful for farmers to be missing their produce and they are just being shipped out,” he said that if the act is applied, the market for stolen agricultural produce would be reduced, thereby reducing the incentive to steal.

“So, if the police are really not doing their job, there is a big problem. Colin John has to motivate his troops and get them up and running,” he said of the Commissioner of Police.

“And it’s an issue the prime minister had to address. But then again, soil to St. Vincent is like oil to Saudi. And those associated with oil in Saudi are the ones with money. Similarly, that’s how it’s supposed to be in St. Vincent. Those associated with the soil are supposed to be the ones in a certain position, but they are not. Once the farmers are poor, the country will be poor and that’s why the country is hungry,” Connell told iWitness News.

2 replies on “Police not taking crimes against farmers seriously — lawyer”