Man who murdered woman, buried her in cemetery gets 26 years in jail 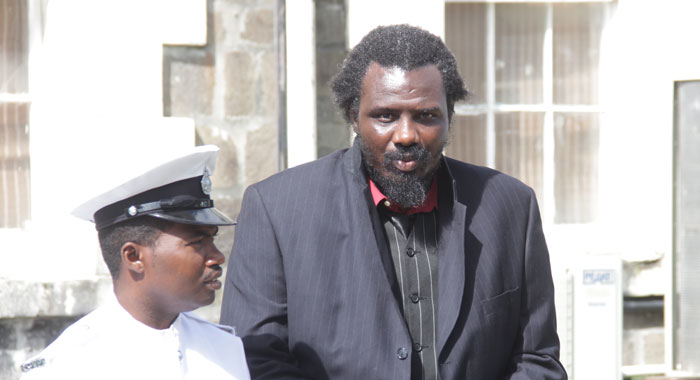 Junior Quashie is escorted back to prison after his sentencing on Friday. (iWN photo)

The psychotic man, who, in 2008, hacked an elderly woman to death, drove around with her body in her car for hours before burying the body at a cemetery has been sentenced to 24 years in prison.

Junior Quashie, of Belair, was facing 36 years in jail for his crime.

However, because of his guilty plea, he received a one-third discount on his sentence, seeing it fall to 24 years.

As Quashie had spent 10 years, 10 months, and eight days on remand as of last Friday — when he was sentenced — he will spend a further 13 years, one month and three weeks in jail.

Justice Brian Cottle sentenced Quashie at the High Court in Kingstown on Friday.

“My thought is that you would be mindful and thoughtful and have mercy or leniency on me. Because, ahhhh — that’s all I have to say.”

The facts in the case are that in April 2008, Allen-Small, a retired librarian who lived alone at Queen’s Drive, drove her car to Indian Bay and sat in the car reading a book for a while before coming out of the vehicle.

Quashie, who was nearby, decided to rob the elderly woman of the car, approached her and demanded the keys.

The woman refused and tried to get back into the car and Quashie slammed the door on her hand, breaking it.

He cut her on the neck with a knife that he was carrying.

As Allen-Small was lying on the ground, he went over her and cut her neck again.

He then opened the back of the car where he saw a bucket and some plastic sheeting.

Quashie used the plastic sheeting to wrap the woman’s body and placed it in the back of the car.

He used the bucket to get some water and washed the bloodstains from the back of the vehicle.

Quashie then drove away with Allen-Small’s body in the back of the car and drove away the vehicle.

Sometime later, while driving the woman’s vehicle, Quashie saw the fuel indicator light come on, showing he was low on fuel.

By that time, it was already near the following morning.

Quashie drove to the Belair cemetery where he dug a shallow grave and buried the body of his victim.

Before that time, relatives of the victim had already discovered that she was missing and had reported the matter to the police.

Police went in search of Allen-Small and found her car in Belair near a church. Their further investigation led them to Quashie, who was found at his home in Belair.

When the police questioned him, Quashie handed over the keys to the car and a search of the car revealed a bag continuing Quashie’s passport.

Police also found, inside the car, Quashie’s cellular telephone and charger, his bankbook and a receipt in his name.

On April 23, 2008, the partially decomposed body of Allen-Small was found in a shallow grave at the Belair cemetery.

A post mortem concluded that she died of the chop wounds to the neck and the amputation of the hand.

On April 28, 2008, Quashie made a statement in the presence of a justice of the peace, admitting to the offence and laying out, in detail, the role that he played in the woman’s death.

In handing down his sentence, Justice Cottle noted that in St. Vincent and the Grenadines, it is still possible for a prisoner to be sentenced to death for murder.

He, however, said that that option is closed to the court because the law says that capital punishment is reserved for the worst of the worst cases.

The judge said that considering the cases that have come before the court, he couldn’t say that Quashie’s murder of Allen Small was one of such cases.

He said the mitigating factors he was able to identify are the plea of guilty and his confession to the police at an early stage.

He further said that Quashie has no relevant previous convictions.

“But I thought that the aggravating features are many. The victim was a vulnerable elderly woman. The prisoner was then age 31. He stands 6 foot 3 inches tall, weighs 230 pounds. He used a weapon against an unarmed woman.”

The judge said that also aggravating was the fact that the murder occurred during the course of a robbery.

“The victim did nothing to provoke this prisoner. The attack was violent. Even as she lay bleeding on the ground, he administered the coup de grace.”

Justice Cottle also noted that Quashie had tried to conceal his crime and was content, after the offence, to drive around in the woman’s car.

He also noted that the attack took place at a public location in a popular local beach and that there was no expression of remorse by Quashie at an early stage.

The judge said this shows a degree of premeditation on the part of the prisoner.

He said that it is important to note that a sentencing court does not just sentence for offences, but sentences offenders.

“So you have to look at the personal circumstances of each of them,” Justice Cottle said.

He pointed out that a psychiatric evaluation was ordered for Quashie.

The psychiatrist reported that Quashie suffers from chronic psychotic disorder, most likely schizophrenia, for which he continues to require anti-psychotic medication to control his symptoms.

The psychiatrist, however, concluded that he was fit to plead, fit to instruct counsel, and fit to stand trial.

A social inquiry report said that Quashie was calm, coherent and willing to share freely during the interviews.

Quashie’s family members and friends expressed shock upon hearing of his role in the crime.

They said he was a quiet person who would not cause trouble, a sentiment echoed by members of the community where he lived at Belair.

The judge said that his calculation on sentencing began from the point that, in his court, cases of murder have been attracting a starting sentence of 30 years in prison.

After taking account of the aggravating and mitigating features, the judge increased the starting point by six years.

Quashie received the standard discount of one-third of his sentence for his guilty plea.

When that was subtracted from the sentence, Quashie was ordered to spend an additional 13 years, one month and three weeks in jail.

11 replies on “Man who murdered woman, buried her in cemetery gets 26 years in jail”