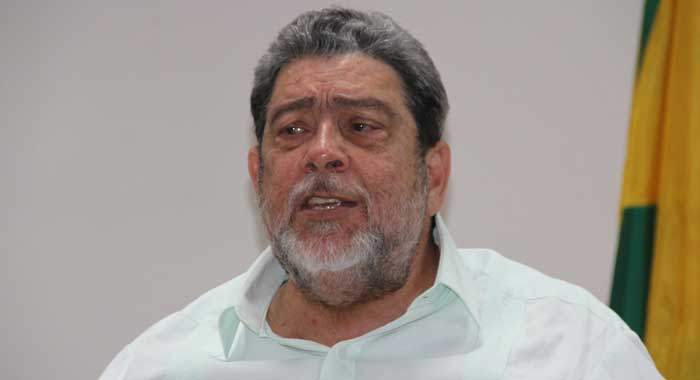 Prime Minister Ralph Gonsalves says that the petitions filed by the opposition, which the court dismissed last Thursday, have “besmirched” the name of St. Vincent and the Grenadines.

Speaking on Star FM, his party’s radio station on Thursday, after the High Court ruling, Gonsalves said that since the December 2015 filing of the legal challenges, the New Democratic Party (NDP) took the country’s name “and put it in the dirt”.

“We are known for having free and fair elections. And the OAS and CARICOM and the local observers say yes, the elections were free and fair and reflected the will of the people.

“They say there might have been an administrative glitch here or there but it reflected the will of the people,” he said.

On Thursday, after a full trial earlier this month, acting High Court judge, Stanley John dismissed the petitions for want of evidence.

The NDP has filed the petition challenging the outcome in Central Leeward and North Windward, where electoral officials said that Unity Labour Party’s Sir Louis Straker and Montgomery Daniel had defeated the NDP’s Benjamin “Ben” Exeter and Lauron “Sharer” Baptiste.

Gonsalves said that since filing the petitions on Dec. 31, 2015, the NDP “telegraphed to investors don’t come; St. Vincent has a government which is not legitimate.

“But you notice that in all the time, I paid no attention to them because I know I would get this time to talk and I’ll take more,” Gonsalves said.

“They have besmirched the good name of St. Vincent and the Grenadines. You see, they have a scorched earth policy. They pull down every single thing under the sun so that if, per chance, they ever were to get into office, what they going to rule over, the rubble, the disaster?”

Gonsalves said that he is “a strong person in my head” and his Unity Labour Party is strong.

“And I just simply tell the fellas, the men and women in our party, let’s just continue to do our work. Sooner rather than later, they will be exposed for what they are: anti national, undemocratic, because they lost the election but they who lost the election want to be in government, just like how they want the policies that were defeated that I must adopt them.

“You ever hear any cockeye story like that since you born? That you who lose election, I must implement your policies and I must step aside because what, some loudmouth name Kay Bacchus or Cummings or Friday or Leacock say they teef the election?” Gonsalves said, referring to opposition Members of Parliament.

“Well, the process of justice grinds slowly but it grinds finely and we have come to this particular path now and they are left naked and they will pay a price in the next election for having done all of this to the country and they will pay a price also because cost will be assessed against them. Ah lot ah money because this case has been going on for a long, long time. We will see what happens further, but clearly, a big bill is there to come,” he said.

The NDP has hinted that it would appeal the court’s decision.