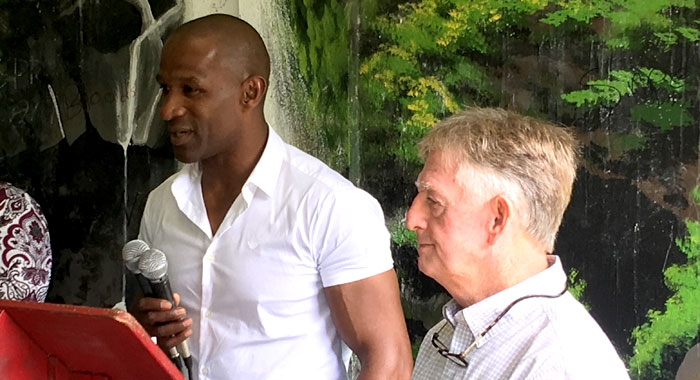 The three new investors in the failed Buccament Bay Resort are hoping to re-open it in December 2019, under a new name.

Businessman Kelly Glass told iWitness News on Tuesday that the acquisition is going  “quite well” but there are still some legal matters to be resolved.

“What’s happened, we have put three different groups together from the UK and here and we are in the final stages of sorting out the last bits and pieces of the legal and regulatory part of the acquisition of the hotel through the liquidators and so forth,” he told iWitness News on the side lines of a donation of whiteboards to Buccament Bay Secondary School.

“It has been a very long, drawn out process because there are a lot of parties involved, so it has not been easy but we are focused and committed to getting it across the line.”

In October 2018, Prime Minister Ralph Gonsalves announced that Glass, a naturalised Vincentian, along with Barry Ferdinand, who is originally of Rose Hall, and Jonathan Mills, a Scot, are the new investors in Buccament Bay Resort, which has been closed since December 2016.

Glass said the investors would like to see all the legal issues sorted out within the next eight weeks.

He said that after that, there will be “significant amount of repairing and infrastructure, central facilities.

“The infrastructure has to be redone and a lot of the interiors have to be repaired, pools — top to bottom.”

He said that in addition to that, the new investors will be expanding the resort.

Speaking in the same interview, Ferdinand emphasised that the December 2019 date is only a target.

“We can only target it. Target is based on a number of things like completion — practical completion has not even been done. We’ve exchanged so we are going through a due diligence process. A target date is December. That was our target. Make sure you quote target date, because targets are moveable.”

Glass told iWitness News that the resort will be rebranded.

“We won’t say the name yet. We will like to keep it in a bit of suspense. That will be done by our marketing people further down the road.”

He said that that they are down to a shortlist of two or three names.

“We are very excited to be doing it. We want to bring it back to as good or better than its former glory. We are not here to do a quick fix. It has to be repaired properly. It’s going to be a flag ship hotel of St. Vincent so we have to do it properly.”

Meanwhile, Ferdinand noted that there is personal interest as well as financial interest in the new investors’ involvement in the project.

“Because, as Kelly is saying, it’s got a bad name but what we have got, we’ve got a blank canvass, along with the airport to try and bring things together. It’s not going to be easy because filling that resort is absolutely the same as filling the airport. So, the government, the country has got to come together to make that work because at the moment, it is seen as a toxic resort. We are here to try and rebrand it, redefine it and I think we are probably in the best place to do it,” he told iWitness News.

19 replies on “Investors hope to reopen Buccament resort in December”