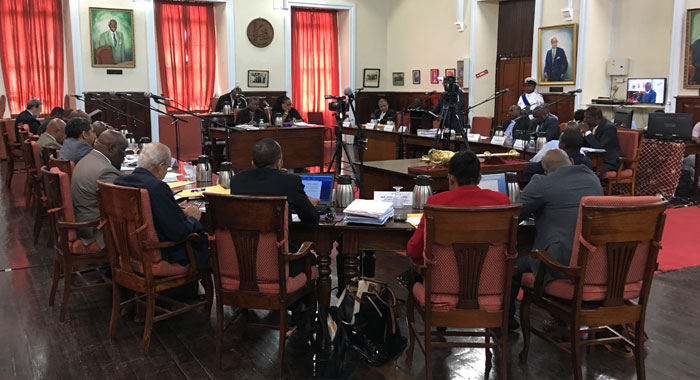 The Vincentian Parliament in session in April 2019. (iWN photo)

Leader of the Opposition Godwin Friday has informed Parliament that opposition lawmakers will table a motion on electoral reform for debate in next month’s meeting.

Friday gave House Speaker Jomo Thomas oral notice and attempted to table a draft of the motion during Monday’s meeting of Parliament.

But Thomas said tabling the draft motion was not necessary.

Private members’ motions take precedent during next month’s meeting of Parliament – the third for the year.

Friday told the speaker that his action was to ensure that the motion is debated then.

“What I wish, Mr. Speaker, is to ensure that this honourable house engages in a debate on this matter when the time comes. I am giving formal notice here but I will follow the procedures in the rules.”

The Unity Labour Party government has, over the years, tabled private members motions and debated them, in an effort to block motions by the opposition.

In introducing the matter, Friday said that opposition lawmakers will table the motion, “… given the context now, considering the approaching general election” and much talk and concern about problems in the electoral system.

Asked about the motion at a press conference on Thursday, Friday said it is “in keeping with this matter of electoral reform”.

“We will address those matters in the parliament and it has to do with establishing an electoral commission … dealing with the 15-day special registration period, dealing with some of the other issues that we have itemised in the letter to the prime minister and other issues that other members of parliament will have encountered during their tenure in the house as politicians in the country.

“We want to make sure that these matters are addressed. We can’t sweep them under the rug and I am encouraged to see that in the press over the last couple of weeks that there has been a call for electoral reform in the writings of a number of people who are there.

“And that means that people have acknowledged that notwithstanding the decision in the petition that there are problems that need to be resolved. And so, that is what the motion would be dealing with.”

He said the decision of the court on March 21 to dismiss two petitions his New Democratic Party filed challenging the outcome of the Dec. 9, 2015 election must be taken in context.

“The point of the petitions is to highlight the problems that we encountered during the elections and to move the date of elections forward so what we could have early elections in St. Vincent and the Grenadines, at least in the two constituencies that were contested and change the government.”

The NDP is challenging the result in North Windward and Central Leeward.

He said that he has itemised in a letter he wrote to Prime Minister Ralph Gonsalves some time ago a number of the issues with the electoral system.

The opposition leader further stated that election chiefs have, over the years, said that the 15-day special registration period after an election is announced creates very difficult circumstances for electoral worker.

The Organisation of American States Electoral observer missions, like the NDP, have said that this special registration period should be abolished, Friday said.

“So we will work to do that,” he told reporters, adding, “the motion … is in keeping with that.”