Hotel at Diamond to be Holiday Inn 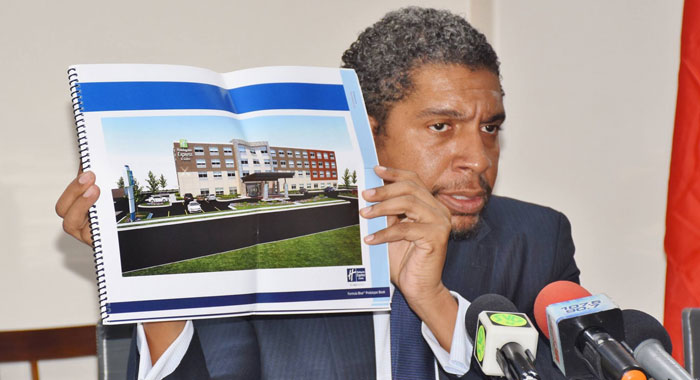 Minister of Finance, Camillo Gonsalves hold up a concept design of the hotel. (Photo: Lance Neverson/Facebook)

The airport hotel that the government of St. Vincent and the Grenadines will construct at Diamond, near the Argyle International Airport, in eastern St. Vincent, will be a Holiday Inn Express and Suites.

“And that design is also complete and the hotel at Diamond, I can say, will look like this,” Minister of Finance Camillo Gonsalves said on Tuesday as he held up a photograph of the concept.

“And that is 93 rooms, it is about four storeys high and will have a small conference area, a pool and some suites throughout the building,” he said.

“And those of you who have stayed in a Holiday Inn Express and Suites before — there is one in Trinidad and Tobago, there is one in Jamaica — will have some knowledge of the type of service that is provided there.

“But we will have further opportunities to discuss that particular hotel and its amenities.”

He said there would be some small variations in the Vincentian model.

“Our pool will be a little bigger and we will have some changes to our suite design, but largely, it will look a lot like the other hotels of that nature near to the airport.”

Gonsalves said that adding 350 rooms to the hotel stock on mainland St. Vincent “is transformative”.

“But it is not just the 350 rooms that the government is adding. You have to remember that the Black Sands hotel at neighbouring Peter’s Hope is going to add 400 rooms,” he said of the hotel on which Canadian investors broke ground more than two years ago.

The developers are projecting to complete the construction of the 40 villas with five rooms each by the third-quarter of 2019, subject to weather and Physical Planning Department approvals.

“So, already, you are up to 750 hotel rooms under construction on mainland St. Vincent,” Gonsalves said.

He said that existing hoteliers are adding rooms incrementally, adding that Beachcombers is going up another floor and adding more rooms.

8 replies on “Hotel at Diamond to be Holiday Inn”