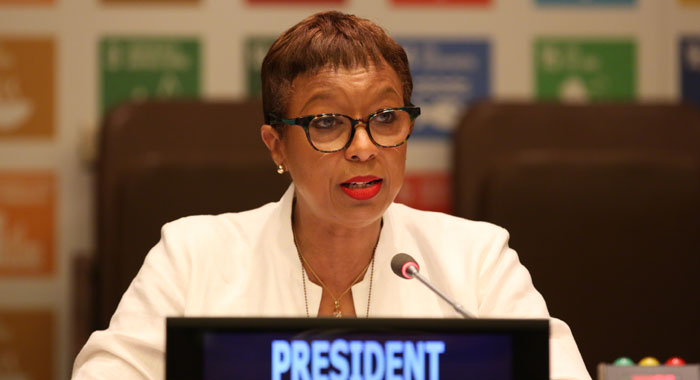 UNITED NATIONS (CMC) — President of the Economic and Social Council (ECOSOC), Inga Rhonda King, Monday said that while progress had been made developing countries are still lagging behind in achieving the Sustainable Development Goals (SDG) by 2030.

Addressing the four-day Forum on Financing for Development (FID) here, King, who is also the St. Vincent and the Grenadines Permanent Representative to the United Nations, said, “we have not seen the broad transformation that we need, to achieve the SDGs by 2030”.

Pointing to economic and other risks, she homed in on “climate change, from the Caribbean to the Sahel”, which has actively reversed development gains; rising debt levels, which stifle investment in sustainable development; and increasing trade tensions dampening economic growth and inequalities within countries.

She told the conference that to address these risks, there was the need to renew commitments to global multilateral cooperation; align financing frameworks to integrate the 2030 Agenda into national development strategies; and accelerate the financing of sustainable development.

Guterres said climate change, greenhouse gas emissions and technologies disrupting labour markets, were a major challenge, saying “we are here today as part of an effort to coordinate an urgent global response to reverse these trends.

But he said there was also the importance of countries themselves generating more funding, including by increasing tax revenue and the impact of investment.

President of the UN General Assembly, María Fernanda Espinosa, noted that while global economic growth has remained steady, it was not enough just to support the 2030 Agenda.

She underscored the need to generate “600 million new decent jobs” up to 2030, which requires policies to take advantage of public and private SDG funding; mobilizing national resources by targeting tax policies, and more international tax cooperation to deal with tax evasion.

“A sustainable development future requires investing now, in the present”, she maintained. “Now it is time to act, to take decisive steps to make the promise to ‘free the human race from the tyranny of poverty’ a reality and contribute to make our Organization more relevant for all”.

In his address to the FID, the Deputy Managing Director of the International Monetary Fund (IMF), Tao Zhang, said the world economy right now is at a delicate moment” as he echoed the outcome of the World Bank and IMF’s spring meetings in Washington last week.

He said while global expansion continues it was at a slower pace than anticipated.

“We need to do better”, he said, noting that stronger medium-term growth will be “essential for developing countries” to achieve the SDGs.

He detailed three “complimentary and reinforcing areas of policy action” to address this, namely, domestic policies to build resilience and promote inclusion; upgraded international cooperation; and the commitment to work together on broader global challenges.

World Bank Senior Vice President for the 2030 Development Agenda, UN Relations, and Partnerships, Mahmoud Mohieldin, said that “business as usual, simply put, will not get us into ending extreme poverty by 2030.

“There will be hundreds of millions of people will be suffering from extreme poverty by 2030 if business remains as we do it today”, with nine-out-of-ten of those affected, in Africa. “Actions are required today”, he said.

He said as an outcome of the spring meeting, “we need bold and urgent reforms in development policies and financing” to achieve job growth opportunities and sustainability in the next decade.