Taking our troubles, trials and triumphs to the world 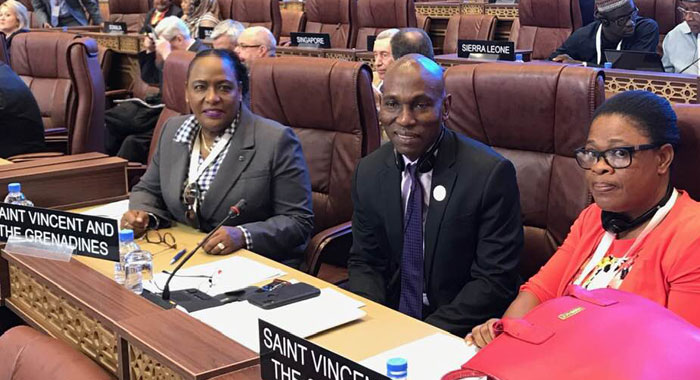 Last Monday, St. Vincent and the Grenadines took a small but important step when it became the 179th member of the Inter-Parliamentary Union (IPU). The union is a grouping of world parliaments that has a strong emphasis on democracy, the rule of law, peace, women’s empowerment and parliamentary independence. The decision came less than two months after our Parliament voted unanimously to join the IPU following a resolution piloted by Speaker Jomo Sanga Thomas.

The 140th Assembly of the IPU, which had as its theme “Education for Peace, Security and the Rule of Law”, was held in Doha, Qatar from April 5 to 10. A three-member delegation comprising Senators Debbie Charles and Kay Bacchus-Baptiste and Speaker Jomo Thomas represented SVG.

In an address delivered to the body last Tuesday, Thomas gave a brief history of our country. He outlined that at Independence in 1979, the former British enslavers and colonialists left our country with only two secondary schools and a ramshackle former military barracks as a lone hospital. He pointed out that at Independence, our country had a functionally illiterate population of over 50 per cent, a deep-seated, but latent racism, where people of African stock were despised and light-skinned blacks or whites had a clear and distinct advantage in all areas of life.

Thomas informed the assembly that a mono-crop agricultural economy over the entire period of British colonial domination, guaranteed that all of the chronic indices of underdevelopment still persisted, 40 years after our country reclaimed its sovereignty from the British.

Thomas told the gathering that the system of genocide, slavery and colonialism instituted by the British, guaranteed that our country remained underdeveloped. It was out of this recognition that the leadership of our country worked tirelessly to ensure that all of CARICOM embrace the concept of reparatory justice.

Delegates were told that in 2013, Caribbean countries proclaimed that the former enslaving nations of England, France, Spain and Holland had a case to answer for their policies of conquest that resulted in genocide, slavery, colonialism and underdevelopment. These actions, he told the representatives of the world parliaments, constituted crimes against humanity for which there are no statutes of limitation. He then called on the leadership of the IPU to lend its voice and support to the righteous claims of Caribbean countries for reparations. He reminded the delegates that a reparatory conversation that resulted in meaningful developmental assistance would go a long way toward assisting with the further education of our people and bring much needed development.

As regards the issues of peace, security and the rule of law, Thomas said that all Caribbean people were concerned with the region remaining a zone of peace. He told the gathering that St. Vincent and the Grenadines was very disturbed by the actions of some rich and powerful countries that have been working overtime to destabilise the neighbouring Caribbean country of Venezuela.

Parliamentarians were reminded that if international law were to have real meaning, concepts such as non-interference and non-intervention into the internal affairs of countries; independence, sovereignty, self-determination and the right of nations and peoples to choose their own path to development have to be respected by all peoples and governments.

Thomas noted that for these principles of international law to have real meaning, major international organisations such as the IPU cannot, indeed must not, simply genuflect to their vitality and importance while turning a blind eye or wink at the naked aggression of nations, especially the United States, in Venezuela. He denounced the sabotage directed against Venezuela by rich and powerful countries and called on the IPU to follow suit.

An IPU resolution condemned those states that unilaterally impose sanctions and blockages without a United Nations mandate. The IPU resolution also called on all states to respect international law. The Speaker of our Parliament reminded the IPU that only when important bodies like itself speak out, would the rich and powerful be checked.

Speaker Thomas called on the delegates to play closer attention to the reality unfolding before their very eyes. Rich and powerful countries, he declared, cherry pick and single out those nations they want to demonise and destroy. They make their economies scream in an attempt to turn away the very people whom the processes are intended to assist, mainly the poor, suffering and vulnerable.

Egregious violators of human rights and the rule of law are egged on and sanitised by these same forces that pick on leaders and countries that are trying to transform their societies in the interest of the majority. Thomas noted that these same forces are a threat to the peace and security of our region.  If they succeeded in regime change in Venezuela, he posited, then all of the Caribbean would be destabilised. Many more refugees will cross borders, and our societies will be at the mercies of those who traffic in illicit guns and drugs intent on benefiting from the chaos and confusion that are bound to ensue if the situation in Venezuela is aggravated rather than be allowed to stabilise.

Thomas offered historical proof that showed that those forces currently terroriaing the Venezuelan government and people, have no real interest in democratic elections or the rule of law. He insisted that these countries were the ones that actively supported the military overthrow of the democratically-elected government of President Salvador Allende in Chile (1973), Hamas in Palestine (2006), President Manuel Zelaya in Honduras (2009) and President Mohamed Morsi in Egypt (2013) the illegal and terroristic destabilization of Prime Minister Michael Manley in Jamaica (1972 to 1980).  He reminded that these same countries also supported the legally suspect jailing of the popular Brazilian leader, former President Lula Da Silva to prevent him from returning to power.

Thomas concluded his address by warning the gathering of parliamentarians that all of their deliberations would be meaningless unless they can transform their words into meaningful and sustainable action.

8 replies on “Taking our troubles, trials and triumphs to the world”