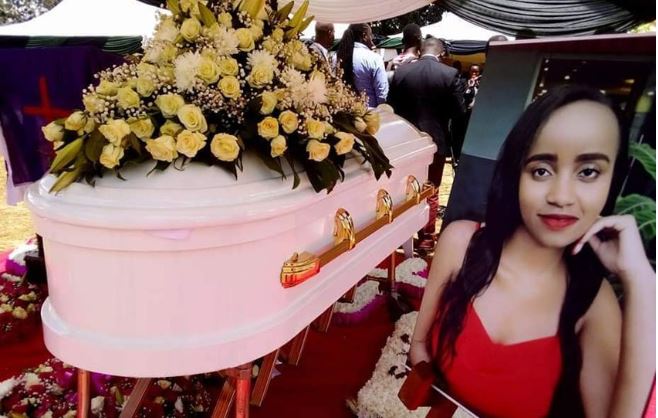 Ivy Wangeci was hacked to death in broad daylight in Eldoret, Kenya on April 9, 2019.

By *Alicia A. Dells

The obvious question that comes to mind is, “Who exactly is Ivy Wangeci?”

From all accounts, Ivy Wangeci was a 25-year-old sixth-year medical student at the Moi University College of Health Sciences in Eldoret , Kenya. She was just months away from realising her dream of becoming a medical doctor. Unfortunately, Wangeci’s life and dreams were cut short on April 9, 2019. She was allegedly killed by Naftali Njahi Kinuthia with an axe in broad daylight in the most macabre manner on the compound of the hospital where she was undergoing her professional training.

It is reported by the Kenyan media that Kinuthia told law enforcement that he killed Wangeci as a result of heartbreak and disappointment from him investing money and emotions into the young lady but his “love” not being reciprocated in line with his expectations.

On the other hand, close friends of the deceased have denied any romantic involvement with Kinuthia but have stated that he was a childhood friend who had turned into a stalker and spurned lover.

Similar to the late Ivy Wangeci, many women across the globe, including me, have had to deal with managing unwanted male attention and advances. This is a very complex subject and quite often we have to strategize and implement a plan on how to effectively communicate to this person, whether an ex–lover, a prospective love interest or a stalker, that we are not interested. The objective is usually to sever all ties without putting your life at risk.

Very often, severing all ties can become a tremendous and dangerous task. Depending on the severity of the situation, it may be best to get the police involved, as attempting to deal with it on a personal level could result in your demise. Anyone in such circumstances should explore options such as filing a police report or applying for a protection/restraining order. As the old saying goes, it is better to be safe than sorry.

It is very unfortunate that toxic masculinity has fostered an environment where some men feel entitled to a woman’s time and body based on what he perceives to be the level of investment made by him. As a result, these men feel justified in their actions as they have normalised predatory behaviour. To them, it is no longer a case of wrongfully invading someone else’s space. Instead, the situation is romanticised as fighting for love.

In order to protect our women, a concerted effort has to be made to totally reject and dismantle the system that reinforces toxic masculinity. Men should to be taught how to effectively manage their feelings/emotions to deal with rejection.  Men should also be taught that they are not entitled to a woman’s body and affection on the basis of any perceived financial or other investment made by them.

The Wangeci incident is reminiscent of the untimely death of my late classmate Stacy Wilson who was killed in a most gruesome manner during rush hour at the Leeward Bus Terminal in St. Vincent in 2006. Wilson was decapitated and her body parts were sliced and spread all over the bus terminal by her killer Shorn Samuel, who, from all reports, was a stalker.

Wilson, like Wangeci, was killed publically in broad day light in the most brazen manner all because she did not reciprocate unwanted romantic advances. Samuel was initially convicted of murder but his conviction was later substituted with manslaughter by the Eastern Caribbean Court of Appeal on the basis of diminished responsibility. He is currently serving life imprisonment at Her Majesty’s Prison in Kingstown.

May Ivy Wangeci and Stacy Wilson Rest in Peace!

*Alicia A. Dells is an attorney-at-Law practising in Barbados. She has also been admitted to practise as a barrister and solicitor in St. Vincent and the Grenadines.

2 replies on “I am Ivy Wangeci”