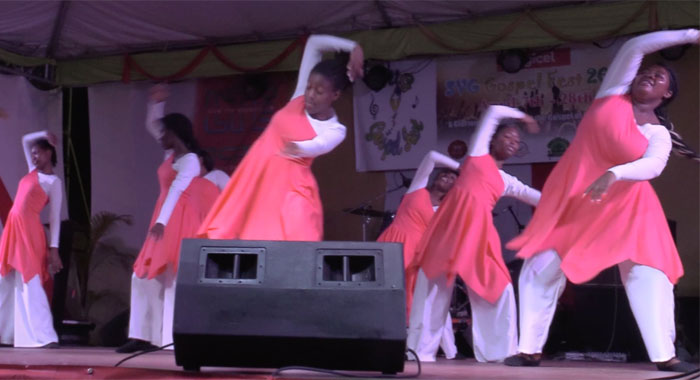 A group of young people perform during the national showcase of the SVG Gospel Fest on Sunday. (iWN photo)

Organisers of the St. Vincent and the Grenadines Gospel Fest say they are looking at way of incentivising more persons into participating in the month of activities that has seen dwindling participation since it began almost two decades ago.

The Reverend Manson Shortte, chair of the SVG Gospel Fest Committee, thanked pastors who continue to support the festival by working with members of their churches to participate.

“And it is really encouraging. In some zones, we have experienced an increase in participation and we have much to be grateful for,” he said.

Speaking on Sunday at the national showcase of the festival in Kingstown, Shortte said that his group “has been hearing some of the “grouses”.

He said that young people are concerned about incentives to be involved in Gospel Fest.

“I want to say to you that this has been our concern. Very early in Gospel Fest, we had medals and certificates and these things take money. But we will consider and we are going to look into incentives and how we can encourage you to be a part of gospel fest,” said Shortte who took the helm of the festival two years ago.

He said he knows that some persons are disappointed that they did not make it to the national showcase.

Shortte, however, reminded patrons that in previous years there used to be two shows at the end of the festival, but there is only one now.

“And so, the space is very limited, so be encouraged,” he said.

“You have ministered, you have done well in the zones and we are going to do as much as possible to make you happy in the long run,” he told persons who might have felt that they should have been involved in the closing showcase.

“I think if God is glorified, if God is being praised, if you have blessed people with your song or with your dance or whatever you did, if God gets the glory, that’s great,” Shortte said.

Shortte thanked the sponsors of the event, saying that every year, the organisers begin “with little or nothing but yet God provides”.

He further said that festival organisers are “very much encouraged and there is nothing that is going to stop us from going forward with Gospel Fest in the next year and years to come.”

Recognising the contribution of Michael Peters, the Ministry of Culture official who coordinates the festival on behalf of the government, Shortte said that when Peters first came to the festival, “he wasn’t considered to be a Christian”, adding that Peters is “very involved in Carnival and some people called him ‘Mr. Carnival’”.

Shortte said there was “a lot of concern about Michael being part of Gospel Fest committee.”

He said some persons said they did not want to have anything to do with Gospel Fest “because Michael Peters is there, he is a carnival man and all that.