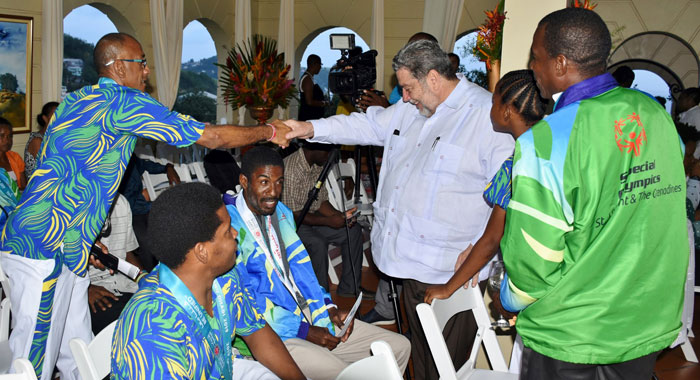 The squad of special Olympians who recently returned from a successful outing at the Special Olympics in Abu Dhabi was toasted at a special cocktail reception in their honour at the official residence of Prime Minister Ralph Gonsalves last Thursday.

In welcoming the athletes, their trainers and family members, Prime Minister Ralph Gonsalves thanked the government and people of the United Arab Emirates, and Minister of State for International Cooperation, and President of Dubai Cares, Reem Al Hashimy for financial assistance to the Vincentian athletes who travelled to Abu Dhabi.

Sir Errol recognised the board of directors for their hard work and emphasised that the recent trip to Abu Dhabi was a note-worthy accomplishment.

National Director of Special Olympics SVG, Sezevra Joseph thanked the coaches for their efforts and the dedication and commitment among athletes for over three years.

Davis stressed that it was an exceptional showcase of skill.

The training director noted that it was a great time; a time where they knew they had to make St. Vincent and the Grenadines proud.

Davis added that it was a moment to pay homage to past stalwarts such as Velma Jackson, Tyrone Spence and others who passed and left a path for others to continue.

One reply on “PM hosts reception for SVG’s Special Olympians”