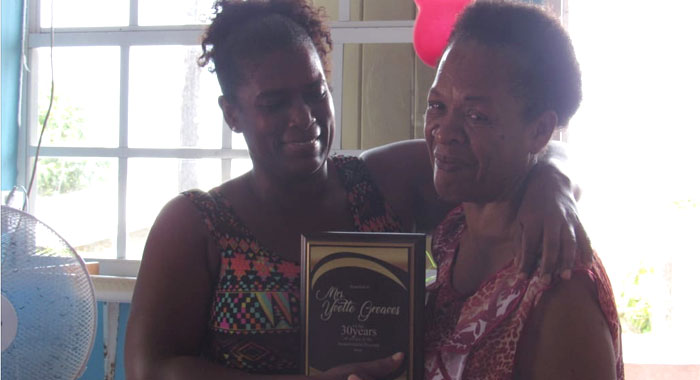 Four years after retiring, Yvette Greaves, of Owia, who served her profession for 30 years, was recognised on April 25 for her service to the North Windward community.

Greaves, who served mostly in Owia from 1986-2015, was recognised during an event that formed part of activities organised by the Owia Health Centre to celebrate Immunisation Week, observed annually during the last week of April.

Judy Baptiste presented a plaque of appreciation to Greaves “on behalf of the mothers for long service and in getting some mothers vaccinated”.

After accepting the plaque, Greaves told of an occasion, a few days before, when she went to Sandy Bay and a resident told her “You see! Look your name on my clinic card!”

“I just want to say thanks for considering me to serve you in the community,” a beaming Greaves said.

The theme of Immunisation Week this year was “Protect your community, do your part, get vaccinated” and was promoted using the hashtags “#getvax”, “#vaccineworks”.

Greaves was appreciated during the clinic’s Parent Appreciation Day.

Staff nurse Veronica McDowall said: “We wanted to do something different from focusing solely on immunisation because the parents play an integral part in getting their children immunised as well…

“Today, our focus was on measles and we also promoted the HPV (human papilloma virus). We used the opportunity to remind the parents about the importance of vaccination, and to remind persons that the clinic is just not a place to come when you are sick but we offer services to the healthy individual as well. So we used this opportunity so that people would come for health information and education.”

A number of persons also received the HPV vaccine.