Too many cases of men beating women in St. Vincent — Appeal Court 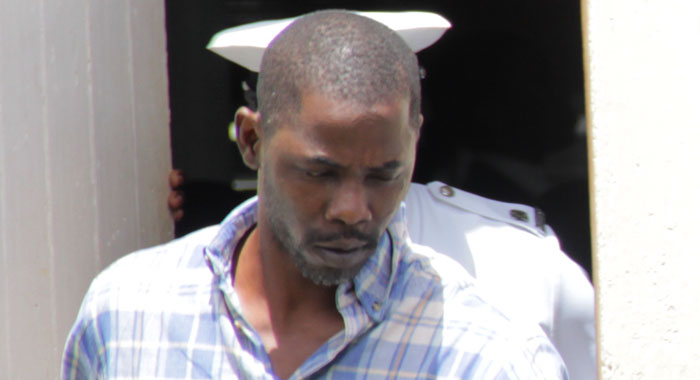 Woman-beater Aaron John returns to prison on Wednesday to complete his three-year sentence for striking his ex-girlfriend in the head with a stone. (iWN photo)

The Court of Appeal, on Wednesday, said there were too many cases of men beating women in St. Vincent and ruled that an Arnos Vale man must serve his full three-year sentence for hitting his ex-girlfriend and mother of his children in the head with a stone.

In rejecting the appeal by Aaron John, Justice of Appeal Louise Blenman said there were too many instances of men beating up women in St. Vincent.

“Too much of it is coming before the court. It’s as if they feel they have a right to beat you,” she said, noting that a protection order had not protected John’s ex-girlfriend, Yvonne Davy, the complainant in the matter, from his violence.

John’s appeal was rejected on a day that he learnt that his son had been murdered in Kingstown, a few hours earlier.

Police say that an unknown assailant shot 19-year-old Darren Davy, also known as “Precious”, of Pole Yard, Arnos Vale, to the left side of his face in Kingstownaround 1:35 a.m. Wednesday. He died in hospital.

Davy had been recently released from prison after the High Court granted him bail on a burglary charge.

During Wednesday’s appeal hearing, counsel Ronald “Ronnie” Marks rose amicus on John’s behalf and explained to the court that the prisoner had just received the news of his son’s death.

“… he is, understandably, upset,” Marks told the court, adding that he would assist John as he could, albeit in a limited capacity.

On March 26, 2018, Senior Magistrate Rickie Burnett, sitting at the Kingstown Magistrate’s Court, sentenced John to three years in jail, after he pleaded guilty, midtrial, to a charge that he had wounded Yvonne Davy by beating her in the head with a stone on Aug. 26, 2017.

In handing down the sentence, the magistrate said that the court takes a dim view of those types of crimes.

In hearing the appeal, Justice Blenman noted that Davy had had a protection order against John at the time of the wounding.

Marks said Davy and John were in a relationship, that she has a substance abuse problem and the children are in her custody.

“He has to look after the children,” the lawyer said, in explaining the contact between the two.

Marks further told the court that he understands that John’s 12-year-old daughter now lives on the street and is pregnant as there is nobody supervising them since her father was imprisoned.

“So how is he counterbalancing hitting her in her head with a stone? Does that justify hitting a woman with a stone in the head?” Justice Blenman said.

Renee Simmons, who represented the Crown in the appeal, told the court that at the time of the incident, the relationship between both parties had ended a year earlier.

“And what would justify taking a stone and hitting a woman in the head and beat her up?” the judge said.

“Yes, they are,” Marks said, but added that the sentence is three years and John had already served 13 months.

Baptiste noted that John has previous convictions against the same complainant.

“They have a very, ahm–” Marks was saying when Baptiste said,

Marks said there was no excuse to wound the victim.

Baptiste said what the court wanted to know was why that should affect the sentence.

“She had a protection order and that couldn’t protect her,” Blenman said.

Baptiste told the John that after listening to Marks, the court finds no basis to upset the sentence of three years’ imprisonment imposed by the magistrate.

6 replies on “Too many cases of men beating women in St. Vincent — Appeal Court”