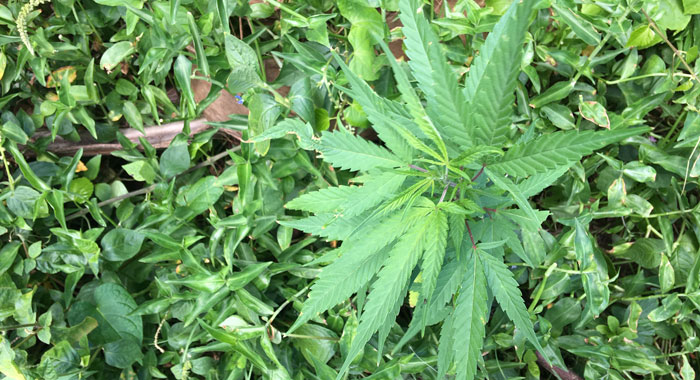 A marijuana plant grows among weeds along a roadside in St. Vincent. (iWN photo)

*By Alicia A. Dells

The Rastafarian community in St. Kitts and Nevis scored a major victory recently with a landmark decision handed down by the High Court legitimising their religion and their sacred practices involving marijuana. The decision of the High Court came about following a constitutional challenge to certain existing laws of the land byRas Sankofa Maccabbeewho represented himself.

This is a welcomed decision promoting religious freedom, especially in light of the current climate where many innocent persons have died tragically and there has been destruction of property in recent mosque attacks in New Zealand and Connecticut, respectively.

Justice Ventose, in an impressive and well-reasoned judgment in MacCabbee v Commissioner of Police & Anor, explores the tenets of the Rastafari religion and acknowledges its entitlement to protection under the Constitution of the Federation of St. Christopher and Nevis as an established religion. The learned judge further struck down the blanket prohibition relating to the possession and cultivation of marijuana under the Drugs Act. He outlined that the relevant provisions hindered the right of members of this religion to their constitutional guarantee of freedom of conscience.

Casting the net even wider, the judge ruled that the relevant provisions of the Drugs Act, which impose a general prohibition on the possession and cultivation of marijuana, also contravene the claimant’s right to privacy under the constitution. In effect, the court has sanctioned the use, possession and cultivation of marijuana for an individual’s personal use in private.

The court has, however, made it clear that its decision relating to the use, possession and cultivation of marijuana excludes minors and is only applicable to adults.

As a result of the judgment, the legislature in St. Christopher and Nevis has been ordered to amend the Drugs Act to the extent that it infringes the fundamental right of adult members of the Rastafarian community to possess and cultivate marijuana for religious use pursuant to their right to freedom of conscience. The legislature has also been ordered to make the necessary amendments to the statute to give effect to the fundamental right of an adult in St. Kitts and Nevis to possess and cultivate marijuana for personal use in private in accordance with their right to privacy.

I am hopeful that MacCabbee v Commissioner of Police & Anor will have far reaching implications and cause a domino effect throughout the region where citizens will be minded to file constitutional challenges to similar archaic laws that remain on the statute books.

Congratulations to Justice Ventose for being bold and for expanding the conversation on cannabis use in the region, which previously seemed to be championed from the vantage point of the capitalist.

Being mindful of how the judicial process works, I await the State’s next move in relation to whether this decision will make its way to the Court of Appeal.

*Alicia A. Dells is an attorney-at-law practising in Barbados. Miss Dells has also been admitted to practise as a barrister and solicitor in St. Vincent and the Grenadines.