No cheque, no questions at Taiwan-SVG briefing

“Late invitations are for dogs,” another journalist retorted. 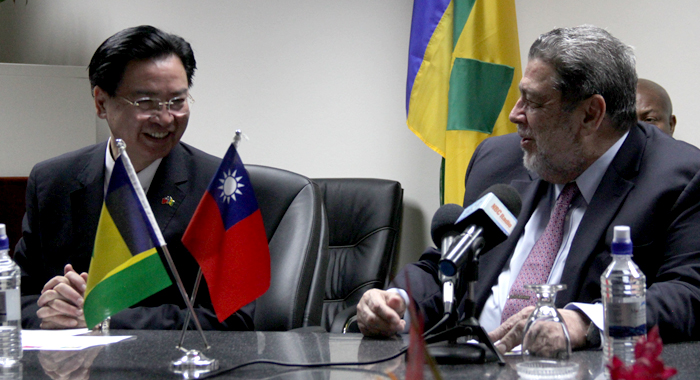 No cheque was presented and no questions were entertained at a press conference between Prime Minister Ralph Gonsalves and Taiwan’s Minister of Foreign Affairs, Jaushieh Joseph Wu in Kingstown on Wednesday.

On Monday, the Office of the Prime Minister invited the media to what it said was a ceremony at 5:45 p.m. on Wednesday at Cabinet Room during which Wu would “present a cheque valued at US$300,000” to Gonsalves.

However, Wednesday’s event turned out to be a “press briefing” in which there was no mention of the cheque or the presentation which the media was invited to witness.

Wu and Gonsalves made statements, but no questions were entertained.

After the statements, Sehon Marshall, press secretary to Prime Minister Ralph Gonsalves, announced that that was the end of the briefing.

“I’d just say this: Don’t feel badly that you didn’t get a chance to ask any questions because we have to go to this  — we can’t be late to this event.  It’s just six minutes. You can buttonhole us up there in between and ask this or that of us in a private way. Joseph is very approachable. Alright? And those who know how to speak mandarin Chinese may get an opportunity to use it. Thank you very much.”

The press briefing, which lasted just under 30 minutes, began about half an hour later than scheduled.

After his comments, Gonsalves then proceeded to ask journalists if they were attending the cocktail.

Some said that they were unable to do so because they of their production deadlines, and one told the prime minister that they had not been invited to attend.

“You are invited now,” someone in the Taiwan delegation said, light-heartedly.

“Late invitations are for dogs,” another journalist retorted.

At the beginning of his statement at the event, Gonsalves had said that he hoped that the media would attend the event at the Official Residence of the Prime Minister and enjoy some cocktails with Vincentians and other invited guests.

“I hope the media can come by too,” he said, adding, “We can’t just work, you know. I hope we can do a few other things, while working is vital.”

The Office of the Prime Minister told iWitness News, on Thursday, that the presentation of the cheque took place during a visit to the Botanical Gardens in Kingstown where a memorandum of understanding was signed.

The office further said that the money was to pay for eight vehicles and two motorbikes for the Royal St. Vincent and the Grenadines Police Force and that the  constabulary had already taken possession of the vehicles, the office said.

The statement said that in SVG, Wu will tour several places of interest and will sign an MOU for the procurement of vehicles to assist the police force, followed by a tour of the terminal building at the Argyle International Airport, which was funded by Taiwan.

Taiwan and SVG established diplomatic ties on Aug. 15, 1981 and since then have enjoyed fruitful relations in areas such as people-to-people exchanges, education, health, agriculture, infrastructure development and technical cooperation.