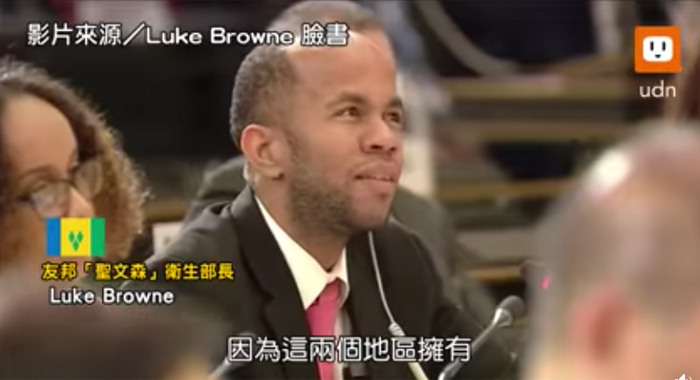 A screen shot of a Taiwan media report on Browne’s speech at the World Health Assembly this month. (iWN photo)

Browne’s celebrity status resulted from the speech he delivered at the World Health Assembly (WHA) meeting this month, calling for Taiwan to be allowed to participate as an observer again.

With the re-election in 2016 of the pro-independence Democratic Progressive Party in Taiwan which China considered a renegade province, Beijing has reinvigorated its efforts to isolate Taipei internationally.

Speaking at a press briefing in Kingstown on Wednesday, Wu noted SVG’s contribution to highlighting, in international fora, issues related to Taiwan.

“As you are quite aware, Taiwan has been squeezed out of many international fora and we have difficulties in participating in international organisations and St. Vincent and the Grenadines has always been very vocal in supporting Taiwan’s international participation,” said Wu at a joint press conference with Prime Minister Ralph Gonsalves.

“Just a couple of weeks ago, we tried, once again, to participate in the World Health Assembly but we haven’t been able to,” said Wu, who is on an official two-day visit of St. Vincent and the Grenadines as part of a regional tour of Taiwan’s diplomatic allies.

“But the health minister of your great country has spoken in a very high volume and I can tell you that your health minister now is a rock star in Taiwan because he has spoken so eloquently in helping Taiwan’s international participation,” Wu said.

Browne’s comments, which were widely reported in Taiwan media has drawn an emotional reaction for many Taiwanese, with some saying on social media that they were moved to tears by his comments.

2 replies on “Luke Browne a ‘rock star’ in Taiwan”